Genetic influences on cattle grazing distribution: Association of genetic markers with terrain use in cattle 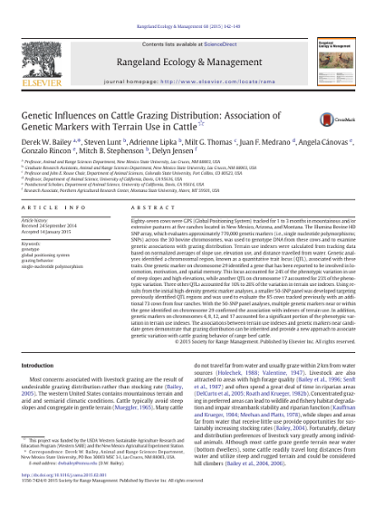 Eighty-seven cows were GPS (Global Positioning System) tracked for 1 to 3 months in mountainous and/or extensive pastures at five ranches located in New Mexico, Arizona, and Montana. The Illumina Bovine HD SNP array, which evaluates approximately 770,000 genetic markers (i.e., single nucleotide polymorphisms; SNPs) across the 30 bovine chromosomes, was used to genotype DNA from these cows and to examine genetic associations with grazing distribution. Terrain use indexes were calculated from tracking data based on normalized averages of slope use, elevation use, and distance travelled from water. Genetic analyses identified a chromosomal region, known as a quantitative trait locus (QTL), associated with these traits. One genetic marker on chromosome 29 identified a gene that has been reported to be involved in locomotion, motivation, and spatial memory. This locus accounted for 24% of the phenotypic variation in use of steep slopes and high elevations, while another QTL on chromosome 17 accounted for 23% of the phenotypic variation. Three other QTLs accounted for 10% to 20% of the variation in terrain use indexes. Using results from the initial high-density genetic marker analyses, a smaller 50-SNP panel was developed targeting previously identified QTL regions and was used to evaluate the 85 cows tracked previously with an additional 73 cows from four ranches. With the 50-SNP panel analyses, multiple genetic markers near or within the gene identified on chromosome 29 confirmed the association with indexes of terrain use. In addition, genetic markers on chromosomes 4, 8, 12, and 17 accounted for a significant portion of the phenotypic variation in terrain use indexes. The associations between terrain use indexes and genetic markers near candidate genes demonstrate that grazing distribution can be inherited and provide a new approach to associate genetic variation with cattle grazing behavior of range beef cattle. © 2015 Society for Range Management. Published by Elsevier Inc. All rights reserved.