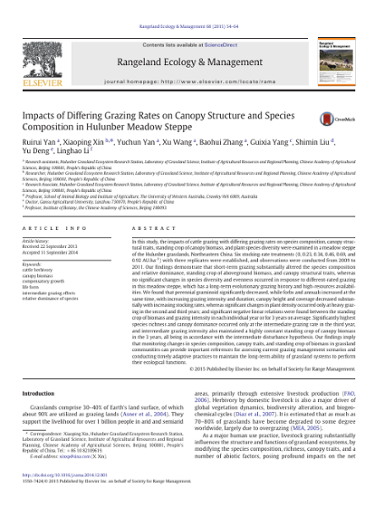 In this study, the impacts of cattle grazing with differing grazing rates on species composition, canopy structural traits, standing crop of canopy biomass, and plant species diversity were examined in a meadow steppe of the Hulunber grasslands, Northeastern China. Six stocking-rate treatments (0, 0.23, 0.34, 0.46, 0.69, and 0.92 AU.ha-1) with three replicates were established, and observations were conducted from 2009 to 2011. Our findings demonstrate that short-term grazing substantially altered the species composition and relative dominance, standing crop of aboveground biomass, and canopy structural traits, whereas no significant changes in species diversity and evenness occurred in response to different-rated grazing in this meadow steppe, which has a long-term evolutionary grazing history and high-resources availabilities. We found that perennial graminoid significantly decreased, while forbs and annuals increased at the same time, with increasing grazing intensity and duration; canopy height and coverage decreased substantially with increasing stocking rates, whereas significant changes in plant density occurred only at heavy grazing in the second and third years; and significant negative linear relations were found between the standing crop of biomass and grazing intensity in each individual year or for 3 years on average. Significantly highest species richness and canopy dominance occurred only at the intermediate grazing rate in the third year, and intermediate grazing intensity also maintained a highly constant standing crop of canopy biomass in the 3 years, all being in accordance with the intermediate disturbance hypothesis. Our findings imply that monitoring changes in species composition, canopy traits, and standing crop of biomass in grassland communities can provide important references for assessing current grazing management scenarios and conducting timely adaptive practices to maintain the long-term ability of grassland systems to perform their ecological functions. © 2015 Published by Elsevier Inc. on behalf of Society for Range Management.