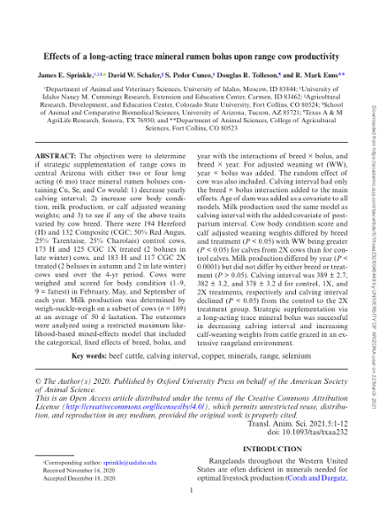 School of Animal and Comparative Biomedical Sciences, University of Arizona

© The Author(s) 2020. Published by Oxford University Press on behalf of the American Society of Animal Science. This is an Open Access article distributed under the terms of the Creative Commons Attribution License (http://creativecommons.org/licenses/by/4.0/).

The objectives were to determine if strategic supplementation of range cows in central Arizona with either two or four long acting (6 mo) trace mineral rumen boluses containing Cu, Se, and Co would: 1) decrease yearly calving interval; 2) increase cow body condition, milk production, or calf adjusted weaning weights; and 3) to see if any of the above traits varied by cow breed. There were 194 Hereford (H) and 132 Composite (CGC; 50% Red Angus, 25% Tarentaise, 25% Charolais) control cows, 173 H and 125 CGC 1X treated (2 boluses in late winter) cows, and 183 H and 117 CGC 2X treated (2 boluses in autumn and 2 in late winter) cows used over the 4-yr period. Cows were weighed and scored for body condition (1-9, 9 = fattest) in February, May, and September of each year. Milk production was determined by weigh-suckle-weigh on a subset of cows (n = 169) at an average of 50 d lactation. The outcomes were analyzed using a restricted maximum likelihood-based mixed-effects model that included the categorical, fixed effects of breed, bolus, and year with the interactions of breed × bolus, and breed × year. For adjusted weaning wt (WW), year × bolus was added. The random effect of cow was also included. Calving interval had only the breed × bolus interaction added to the main effects. Age of dam was added as a covariate to all models. Milk production used the same model as calving interval with the added covariate of postpartum interval. Cow body condition score and calf adjusted weaning weights differed by breed and treatment (P < 0.05) with WW being greater (P < 0.05) for calves from 2X cows than for control calves. Milk production differed by year (P < 0.0001) but did not differ by either breed or treatment (P > 0.05). Calving interval was 389 ± 2.7, 382 ± 3.2, and 378 ± 3.2 d for control, 1X, and 2X treatments, respectively and calving interval declined (P < 0.05) from the control to the 2X treatment group. Strategic supplementation via a long-acting trace mineral bolus was successful in decreasing calving interval and increasing calf-weaning weights from cattle grazed in an extensive rangeland environment.

Except where otherwise noted, this item's license is described as © The Author(s) 2020. Published by Oxford University Press on behalf of the American Society of Animal Science. This is an Open Access article distributed under the terms of the Creative Commons Attribution License (http://creativecommons.org/licenses/by/4.0/).