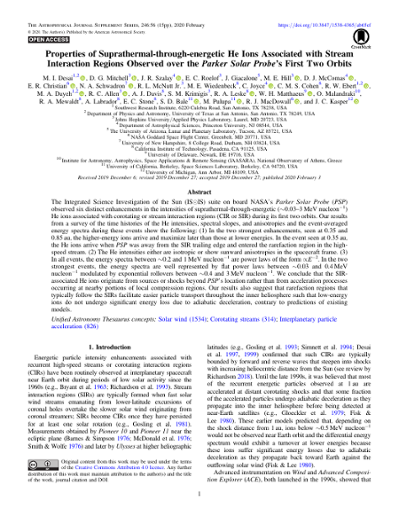 © 2020 The Author(s). Published by the American Astronomical Society. Original content from this work may be used under the terms of the Creative Commons Attribution 4.0 licence. Any further distribution of this work must maintain attribution to the author(s) and the titleof the work, journal citation and DOI.

The Integrated Science Investigation of the Sun (IS circle dot IS) suite on board NASA's Parker Solar Probe (PSP) observed six distinct enhancements in the intensities of suprathermal-through-energetic (similar to 0.03-3 MeV nucleon(-1)) He ions associated with corotating or stream interaction regions (CIR or SIR) during its first two orbits. Our results from a survey of the time histories of the He intensities, spectral slopes, and anisotropies and the event-averaged energy spectra during these events show the following: (1) In the two strongest enhancements, seen at 0.35 and 0.85 au, the higher-energy ions arrive and maximize later than those at lower energies. In the event seen at 0.35 au, the He ions arrive when PSP was away from the SIR trailing edge and entered the rarefaction region in the highspeed stream. (2) The He intensities either are isotropic or show sunward anisotropies in the spacecraft frame. (3) In all events, the energy spectra between similar to 0.2 and 1 MeV nucleon(-1) are power laws of the form proportional to E-2. In the two strongest events, the energy spectra are well represented by flat power laws between similar to 0.03 and 0.4 MeV nucleon(-1) modulated by exponential rollovers between similar to 0.4 and 3 MeV nucleon(-1). We conclude that the SIR-associated He ions originate from sources or shocks beyond PSP's location rather than from acceleration processes occurring at nearby portions of local compression regions. Our results also suggest that rarefaction regions that typically follow the SIRs facilitate easier particle transport throughout the inner heliosphere such that low-energy ions do not undergo significant energy loss due to adiabatic deceleration, contrary to predictions of existing models.

Except where otherwise noted, this item's license is described as © 2020 The Author(s). Published by the American Astronomical Society. Original content from this work may be used under the terms of the Creative Commons Attribution 4.0 licence. Any further distribution of this work must maintain attribution to the author(s) and the titleof the work, journal citation and DOI.