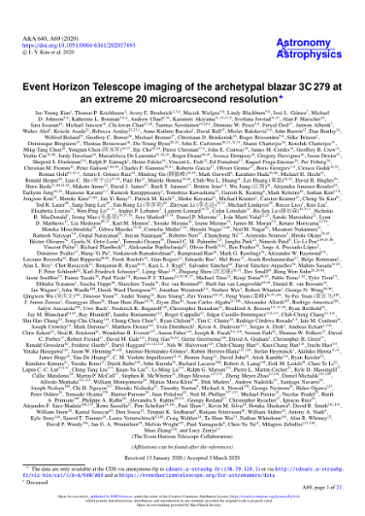 © J.-Y. Kim et al. 2020. Open Access article, published by EDP Sciences, under the terms of the Creative Commons Attribution License (https://creativecommons.org/licenses/by/4.0), which permits unrestricted use, distribution, and reproduction in any medium, provided the original work is properly cited.

3C 279 is an archetypal blazar with a prominent radio jet that show broadband flux density variability across the entire electromagnetic spectrum. We use an ultra-high angular resolution technique - global Very Long Baseline Interferometry (VLBI) at 1.3 mm (230 GHz) - to resolve the innermost jet of 3C 279 in order to study its fine-scale morphology close to the jet base where highly variable gamma -ray emission is thought to originate, according to various models. The source was observed during four days in April 2017 with the Event Horizon Telescope at 230 GHz, including the phased Atacama Large Millimeter/submillimeter Array (ALMA), at an angular resolution of similar to 20 mu as (at a redshift of z=0.536 this corresponds to similar to 0.13 pc similar to 1700 Schwarzschild radii with a black hole mass M-BH=8x10(8) M-circle dot). Imaging and model-fitting techniques were applied to the data to parameterize the fine-scale source structure and its variation. We find a multicomponent inner jet morphology with the northernmost component elongated perpendicular to the direction of the jet, as imaged at longer wavelengths. The elongated nuclear structure is consistent on all four observing days and across different imaging methods and model-fitting techniques, and therefore appears robust. Owing to its compactness and brightness, we associate the northern nuclear structure as the VLBI "core". This morphology can be interpreted as either a broad resolved jet base or a spatially bent jet. We also find significant day-to-day variations in the closure phases, which appear most pronounced on the triangles with the longest baselines. Our analysis shows that this variation is related to a systematic change of the source structure. Two inner jet components move non-radially at apparent speeds of similar to 15 c and similar to 20 c (similar to 1.3 and similar to 1.7 mu as day(-1), respectively), which more strongly supports the scenario of traveling shocks or instabilities in a bent, possibly rotating jet. The observed apparent speeds are also coincident with the 3C 279 large-scale jet kinematics observed at longer (cm) wavelengths, suggesting no significant jet acceleration between the 1.3 mm core and the outer jet. The intrinsic brightness temperature of the jet components are less than or similar to 10(10) K, a magnitude or more lower than typical values seen at >= 7 mm wavelengths. The low brightness temperature and morphological complexity suggest that the core region of 3C 279 becomes optically thin at short (mm) wavelengths.

Except where otherwise noted, this item's license is described as © J.-Y. Kim et al. 2020. Open Access article, published by EDP Sciences, under the terms of the Creative Commons Attribution License (https://creativecommons.org/licenses/by/4.0), which permits unrestricted use, distribution, and reproduction in any medium, provided the original work is properly cited.