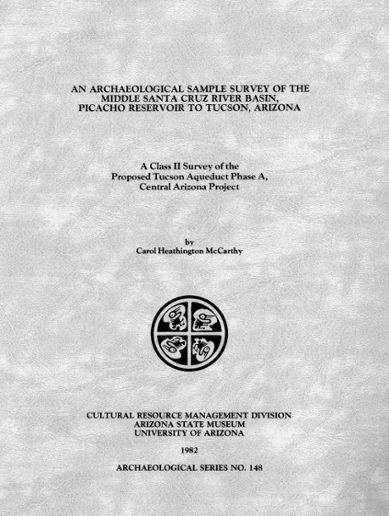 This report presents the results of the Class II (sample) survey of the Tucson Division of the Central Arizona Project. The survey was designed to test the predictive model developed as a part of the Class I (overview) survey of the project area (Westfall 1979). Statistical tests using the survey data show that the model was not particularly successful in predicting the location of cultural resources within the survey area and that it definitely underestimated the archaeological sensitivity of Zone 4, the creosote-bur sage community, which covers most of the project area. Although there was no significant difference in the frequency of sites between zones, the survey results suggest that Zone 3, which includes the desert wash systems of the area, is relatively higher in archaeological sensitivity. An alternate model based on topography and availability of water is evaluated using the survey data. This model may provide a more accurate approximation of site distribution. Finally, recommendations for selection of an aqueduct alignment or alignments and for future archaeological work are provided. As suggested by Westfall, the areas along major water sources such as the Santa Cruz River, McClellan, Brady, and possibly Durham washes, are high in archaeological sensitivity. More sites and larger, more complex sites are concentrated in these areas; construction in these areas should be minimized or avoided if possible. Additional archaeological studies should attempt to assess the relationships between sites, and to determine whether the topographic model proposed in this report may be a reliable predictor of site location. Further survey may permit refinement of this model, or may suggest an alternative which is a better estimator of site distribution. The necessary data concerning functional site types are not readily derived from surface observations, and model testing may await excavation of some sites in the area.