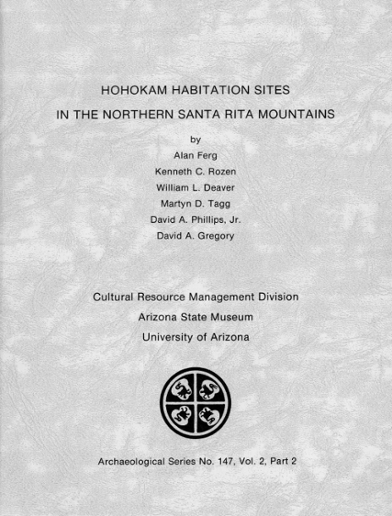 Comparisons show them to be similar to forms known from other Hohokam sites. In the ninth chapter an analysis of the factors influencing settlement location is presented. Variables such as topography, soils, vegetation, elevation, and distance to permanent water are found to have low correlations to site location, but location of sites is highly correlated to stream profile gradient. Comparisons with sites located in similar areas in southeastern Arizona suggest that this variable may have considerable explanatory and predictive power. The last chapter pulls together all available data to examine the nature of the Hohokam occupation of the Rosemont area. Functional site types and intrasite organization are first discussed. Three categories of functional site types (new farmsteads, stable or growing farmsteads, and one site with a ballcourt) are recognized, as is a pattern on intrasite organization which is probably based in part on Hohokam customs and in part on local topography. Economy and subsistence are next examined, and from the meager data available it is proposed that maize agriculture supplemented by hunting and gathering of upland fauna and flora supported the area's inhabitants. Examination of areal and regional relationships indicates principal contacts with the Phoenix Basin Hohokam, the Mogollon, and the Trincheras cultures. Intrusive decorated pottery is the primary evidence for contact, although the presence of a large number of inhumations and certain aspects of architecture provide further documentation of intercultural contact. The nature of the Tucson Basin Hohokam occupation of the area is next traced in terms of site distribution, population distribution, and intersite organization. Possible organization of the Rosemont "local system" is discussed, and reconstructions of temporal trends in settlement and population numbers are presented. Unstable climatic conditions, in conjunction with overexploitation of the local resource base, is suggested to be the ultimate cause of abandonment of the Rosemont area.