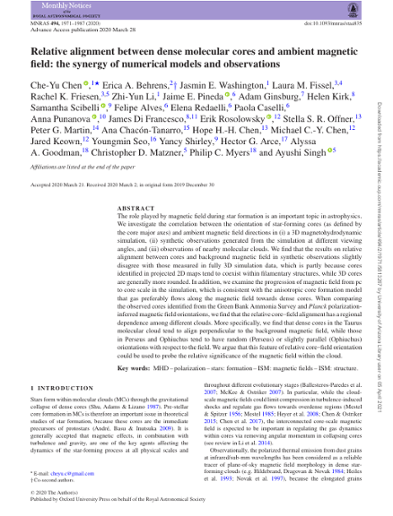 The role played by magnetic field during star formation is an important topic in astrophysics. We investigate the correlation between the orientation of star-forming cores (as defined by the core major axes) and ambient magnetic field directions in (i) a 3D magnetohydrodynamic simulation, (ii) synthetic observations generated from the simulation at different viewing angles, and (iii) observations of nearby molecular clouds. We find that the results on relative alignment between cores and background magnetic field in synthetic observations slightly disagree with those measured in fully 3D simulation data, which is partly because cores identified in projected 2D maps tend to coexist within filamentary structures, while 3D cores are generally more rounded. In addition, we examine the progression of magnetic field from pc to core scale in the simulation, which is consistent with the anisotropic core formation model that gas preferably flows along the magnetic field towards dense cores. When comparing the observed cores identified from the Green Bank Ammonia Survey and Planck polarizationinferred magnetic field orientations, we find that the relative core-field alignment has a regional dependence among different clouds. More specifically, we find that dense cores in the Taurus molecular cloud tend to align perpendicular to the background magnetic field, while those in Perseus and Ophiuchus tend to have random (Perseus) or slightly parallel (Ophiuchus) orientations with respect to the field. We argue that this feature of relative core-field orientation could be used to probe the relative significance of the magnetic field within the cloud.