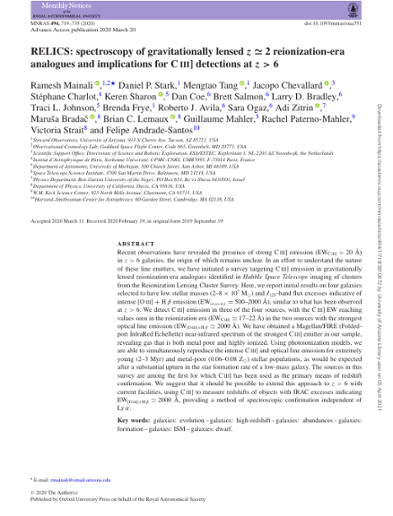 ©2020 The Author(s). Published by Oxford University Press on behalf of the Royal Astronomical Society.

Recent observations have revealed the presence of strong C III] emission (EWC III] > 20 angstrom) in z > 6 galaxies, the origin of which remains unclear. In an effort to understand the nature of these line emitters, we have initiated a survey targeting C III] emission in gravitationally lensed reionization-era analogues identified in Hubble Space Telescope imaging of clusters itom the Reionization Lensing Cluster Survey. Here, we report initial results on four galaxies selected to have low stellar masses (2-8 x 10(7) M-circle dot) and J(125)-band flux excesses indicative of intense [O III] H beta emission (EW[O III] (+)(H beta) = 500-2000 angstrom), similar to what has been observed at z > 6. We detect C III] emission in three of the four sources, with the C III] EW reaching values seen in the reionization era (EWC III] 17-22 angstrom) in the two sources with the strongest optical line emission (EW[O III]+H beta 2000 angstrom). We have obtained a Magellan/FIRE (Folded-port InfraRed Echellette) near-infrared spectrum of the strongest C III] emitter in our sample, revealing gas that is both metal poor and highly ionized. Using photoionization models, we are able to simultaneously reproduce the intense C III] and optical line emission for extremely young (2-3 Myr) and metal-poor (0.06-0.08 Z(circle dot)) stellar populations, as would be expected after a substantial upturn in the star formation rate of a low-mass galaxy. The sources in this survey are among the first for which C III] has been used as the primary means of redshift confirmation. We suggest that it should be possible to extend this approach to z > 6 with current facilities, using C III] to measure redshifts of objects with IRAC excesses indicating EW[O III]+H beta 2000 angstrom, providing a method of spectroscopic confirmation independent of Ly alpha.