Snowpack‐ and Soil Water Content‐Related Hydrologic Indices and Their Association With Radial Growth of Conifers in the Sierra Nevada, California 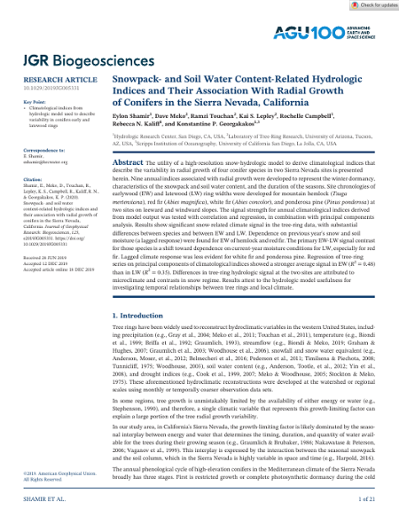 The utility of a high-resolution snow-hydrologic model to derive climatological indices that describe the variability in radial growth of four conifer species in two Sierra Nevada sites is presented herein. Nine annual indices associated with radial growth were developed to represent the winter dormancy, characteristics of the snowpack and soil water content, and the duration of the seasons. Site chronologies of earlywood (EW) and latewood (LW) ring widths were developed for mountain hemlock (Tsuga mertensiana), red fir (Abies magnifica), white fir (Abies concolor), and ponderosa pine (Pinus ponderosa) at two sites on leeward and windward slopes. The signal strength for annual climatological indices derived from model output was tested with correlation and regression, in combination with principal components analysis. Results show significant snow-related climate signal in the tree-ring data, with substantial differences between species and between EW and LW. Dependence on previous year's snow and soil moisture (a lagged response) were found for EW of hemlock and red fir. The primary EW-LW signal contrast for those species is a shift toward dependence on current-year moisture conditions for LW, especially for red fir. Lagged climate response was less evident for white fir and ponderosa pine. Regression of tree-ring series on principal components of climatological indices showed a stronger average signal in EW (R-2 = 0.48) than in LW (R-2 = 0.35). Differences in tree-ring hydrologic signal at the two sites are attributed to microclimate and contrasts in snow regime. Results attest to the hydrologic model usefulness for investigating temporal relationships between tree rings and local climate.