Trajectory Estimation for Particles Observed in the Vicinity of (101955) Bennu 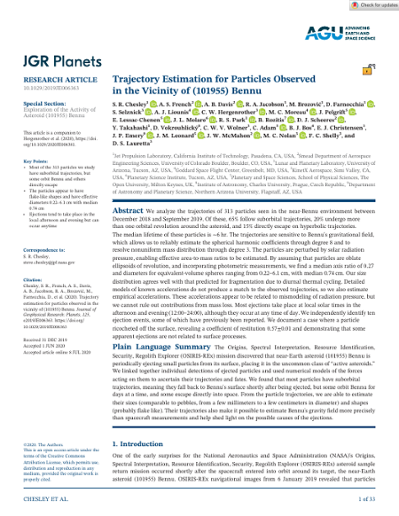 © 2020. The Authors. This is an open access article under the terms of the Creative Commons Attribution License.

We analyze the trajectories of 313 particles seen in the near-Bennu environment between December 2018 and September 2019. Of these, 65% follow suborbital trajectories, 20% undergo more than one orbital revolution around the asteroid, and 15% directly escape on hyperbolic trajectories. The median lifetime of these particles is similar to 6 hr. The trajectories are sensitive to Bennu's gravitational field, which allows us to reliably estimate the spherical harmonic coefficients through degree 8 and to resolve nonuniform mass distribution through degree 3. The particles are perturbed by solar radiation pressure, enabling effective area-to-mass ratios to be estimated. By assuming that particles are oblate ellipsoids of revolution, and incorporating photometric measurements, we find a median axis ratio of 0.27 and diameters for equivalent-volume spheres ranging from 0.22-6.1 cm, with median 0.74 cm. Our size distribution agrees well with that predicted for fragmentation due to diurnal thermal cycling. Detailed models of known accelerations do not produce a match to the observed trajectories, so we also estimate empirical accelerations. These accelerations appear to be related to mismodeling of radiation pressure, but we cannot rule out contributions from mass loss. Most ejections take place at local solar times in the afternoon and evening (12:00-24:00), although they occur at any time of day. We independently identify ten ejection events, some of which have previously been reported. We document a case where a particle ricocheted off the surface, revealing a coefficient of restitution 0.57 +/- 0.01 and demonstrating that some apparent ejections are not related to surface processes. Plain Language Summary The Origins, Spectral Interpretation, Resource Identification, Security, Regolith Explorer (OSIRIS-REx) mission discovered that near-Earth asteroid (101955) Bennu is periodically ejecting small particles from its surface, placing it in the uncommon class of "active asteroids." We linked together individual detections of ejected particles and used numerical models of the forces acting on them to ascertain their trajectories and fates. We found that most particles have suborbital trajectories, meaning they fall back to Bennu's surface shortly after being ejected, but some orbit Bennu for days at a time, and some escape directly into space. From the particle trajectories, we are able to estimate their sizes (comparable to pebbles, from a few millimeters to a few centimeters in diameter) and shapes (probably flake like). Their trajectories also make it possible to estimate Bennu's gravity field more precisely than spacecraft measurements and help shed light on the possible causes of the ejections.

Except where otherwise noted, this item's license is described as © 2020. The Authors. This is an open access article under the terms of the Creative Commons Attribution License.