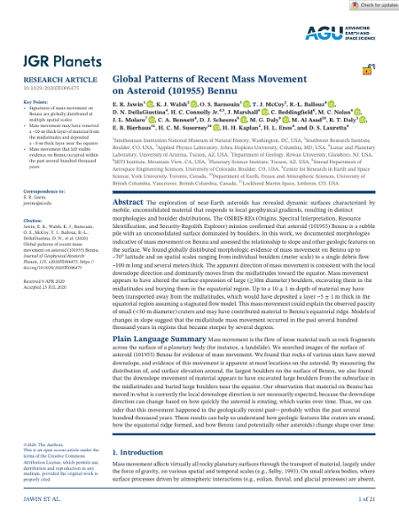 © 2020. The Authors. This is an open access article under the terms of the Creative Commons Attribution License.

The exploration of near-Earth asteroids has revealed dynamic surfaces characterized by mobile, unconsolidated material that responds to local geophysical gradients, resulting in distinct morphologies and boulder distributions. The OSIRIS-REx (Origins, Spectral Interpretation, Resource Identification, and Security-Regolith Explorer) mission confirmed that asteroid (101955) Bennu is a rubble pile with an unconsolidated surface dominated by boulders. In this work, we documented morphologies indicative of mass movement on Bennu and assessed the relationship to slope and other geologic features on the surface. We found globally distributed morphologic evidence of mass movement on Bennu up to similar to 70 degrees latitude and on spatial scales ranging from individual boulders (meter scale) to a single debris flow similar to 100 m long and several meters thick. The apparent direction of mass movement is consistent with the local downslope direction and dominantly moves from the midlatitudes toward the equator. Mass movement appears to have altered the surface expression of large (>= 30m diameter) boulders, excavating them in the midlatitudes and burying them in the equatorial region. Up to a 10 +/- 1 m depth of material may have been transported away from the midlatitudes, which would have deposited a layer similar to 5 +/- 1 m thick in the equatorial region assuming a stagnated flow model. This mass movement could explain the observed paucity of small (<50-m diameter) craters and may have contributed material to Bennu's equatorial ridge. Models of changes in slope suggest that the midlatitude mass movement occurred in the past several hundred thousand years in regions that became steeper by several degrees. Plain Language Summary Mass movement is the flow of loose material such as rock fragments across the surface of a planetary body (for instance, a landslide). We searched images of the surface of asteroid (101955) Bennu for evidence of mass movement. We found that rocks of various sizes have moved downslope, and evidence of this movement is apparent at most locations on the asteroid. By measuring the distribution of, and surface elevation around, the largest boulders on the surface of Bennu, we also found that the downslope movement of material appears to have excavated large boulders from the subsurface in the midlatitudes and buried large boulders near the equator. Our observation that material on Bennu has moved in what is currently the local downslope direction is not necessarily expected, because the downslope direction can change based on how quickly the asteroid is rotating, which varies over time. Thus, we can infer that this movement happened in the geologically recent past-probably within the past several hundred thousand years. These results can help us understand how geologic features like craters are erased, how the equatorial ridge formed, and how Bennu (and potentially other asteroids) change shape over time.

Except where otherwise noted, this item's license is described as © 2020. The Authors. This is an open access article under the terms of the Creative Commons Attribution License.