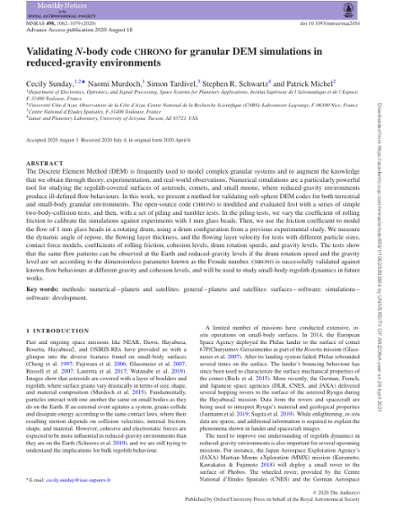 The Discrete Element Method (DEM) is frequently used to model complex granular systems and to augment the knowledge that we obtain through theory, experimentation, and real-world observations. Numerical simulations are a particularly powerful tool for studying the regolith-covered surfaces of asteroids, comets, and small moons, where reduced-gravity environments produce ill-defined flow behaviours. In this work, we present a method for validating soft-sphere DEM codes for both terrestrial and small-body granular environments. The open-source code CHRONO is modified and evaluated first with a series of simple two-body-collision tests, and then, with a set of piling and tumbler tests. In the piling tests, we vary the coefficient of rolling friction to calibrate the simulations against experiments with 1 mm glass beads. Then, we use the friction coefficient to model the flow of 1 mm glass beads in a rotating drum, using a drum configuration from a previous experimental study. We measure the dynamic angle of repose, the flowing layer thickness, and the flowing layer velocity for tests with different particle sizes, contact force models, coefficients of rolling friction, cohesion levels, drum rotation speeds, and gravity levels. The tests show that the same flow patterns can be observed at the Earth and reduced-gravity levels if the drum rotation speed and the gravity level are set according to the dimensionless parameter known as the Froude number. CHRONO is successfully validated against known flow behaviours at different gravity and cohesion levels, and will be used to study small-body regolith dynamics in future works.