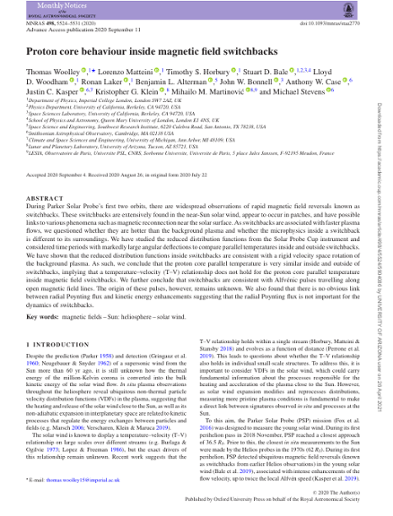 During Parker Solar Probe's first two orbits, there are widespread observations of rapid magnetic field reversals known as switchbacks. These switchbacks are extensively found in the near-Sun solar wind, appear to occur in patches, and have possible links to various phenomena such as magnetic reconnection near the solar surface. As switchbacks are associated with faster plasma flows, we questioned whether they are hotter than the background plasma and whether the microphysics inside a switchback is different to its surroundings. We have studied the reduced distribution functions from the Solar Probe Cup instrument and considered time periods with markedly large angular deflections to compare parallel temperatures inside and outside switchbacks. We have shown that the reduced distribution functions inside switchbacks are consistent with a rigid velocity space rotation of the background plasma. As such, we conclude that the proton core parallel temperature is very similar inside and outside of switchbacks, implying that a temperature-velocity (T-V) relationship does not hold for the proton core parallel temperature inside magnetic field switchbacks. We further conclude that switchbacks are consistent with Alfvenic pulses travelling along open magnetic field lines. The origin of these pulses, however, remains unknown. We also found that there is no obvious link between radial Poynting flux and kinetic energy enhancements suggesting that the radial Poynting flux is not important for the dynamics of switchbacks.