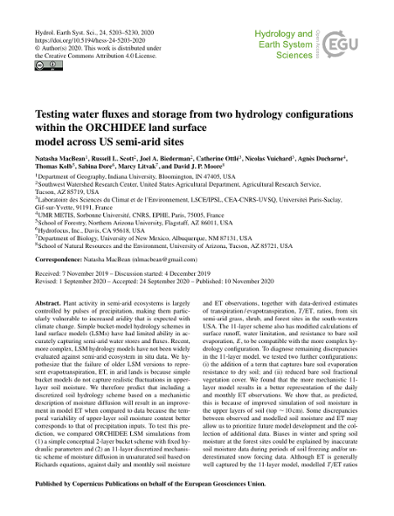 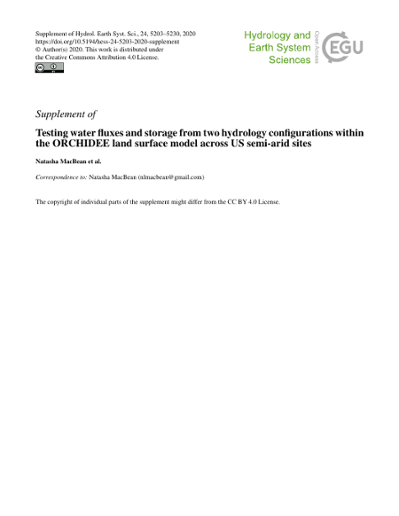 © Author(s) 2020. This work is distributed under the Creative Commons Attribution 4.0 License.

Plant activity in semi-arid ecosystems is largely controlled by pulses of precipitation, making them particularly vulnerable to increased aridity that is expected with climate change. Simple bucket-model hydrology schemes in land surface models (LSMs) have had limited ability in accurately capturing semi-arid water stores and fluxes. Recent, more complex, LSM hydrology models have not been widely evaluated against semi-arid ecosystem in situ data. We hypothesize that the failure of older LSM versions to represent evapotranspiration, ET, in arid lands is because simple bucket models do not capture realistic fluctuations in upperlayer soil moisture. We therefore predict that including a discretized soil hydrology scheme based on a mechanistic description of moisture diffusion will result in an improvement in model ET when compared to data because the temporal variability of upper-layer soil moisture content better corresponds to that of precipitation inputs. To test this prediction, we compared ORCHIDEE LSM simulations from (1) a simple conceptual 2-layer bucket scheme with fixed hydraulic parameters and (2) an 11-layer discretized mechanistic scheme of moisture diffusion in unsaturated soil based on Richards equations, against daily and monthly soil moisture and ET observations, together with data-derived estimates of transpiration/evapotranspiration, T/ET, ratios, from six semi-arid grass, shrub, and forest sites in the south-western USA. The 11-layer scheme also has modified calculations of surface runoff, water limitation, and resistance to bare soil evaporation, E, to be compatible with the more complex hydrology configuration. To diagnose remaining discrepancies in the 11-layer model, we tested two further configurations: (i) the addition of a term that captures bare soil evaporation resistance to dry soil; and (ii) reduced bare soil fractional vegetation cover. We found that the more mechanistic 11-layer model results in a better representation of the daily and monthly ET observations. We show that, as predicted, this is because of improved simulation of soil moisture in the upper layers of soil (top similar to 10 cm). Some discrepancies between observed and modelled soil moisture and ET may allow us to prioritize future model development and the collection of additional data. Biases in winter and spring soil moisture at the forest sites could be explained by inaccurate soil moisture data during periods of soil freezing and/or underestimated snow forcing data. Although ET is generally well captured by the 11-layer model, modelled T/ET ratios were generally lower than estimated values across all sites, particularly during the monsoon season. Adding a soil resistance term generally decreased simulated bare soil evaporation, E, and increased soil moisture content, thus increasing transpiration, T, and reducing the negative bias between modelled and estimated monsoon T/ET ratios. This negative bias could also be accounted for at the low-elevation sites by decreasing the model bare soil fraction, thus increasing the amount of transpiring leaf area. However, adding the bare soil resistance term and decreasing the bare soil fraction both degraded the model fit to ET observations. Furthermore, remaining discrepancies in the timing of the transition from minimum T/ET ratios during the hot, dry May-June period to high values at the start of the monsoon in July-August may also point towards incorrect modelling of leaf phenology and vegetation growth in response to monsoon rains. We conclude that a discretized soil hydrology scheme and associated developments improve estimates of ET by allowing the modelled upper-layer soil moisture to more closely match the pulse precipitation dynamics of these semi-arid ecosystems; however, the partitioning of T from E is not solved by this modification alone.

Except where otherwise noted, this item's license is described as © Author(s) 2020. This work is distributed under the Creative Commons Attribution 4.0 License.