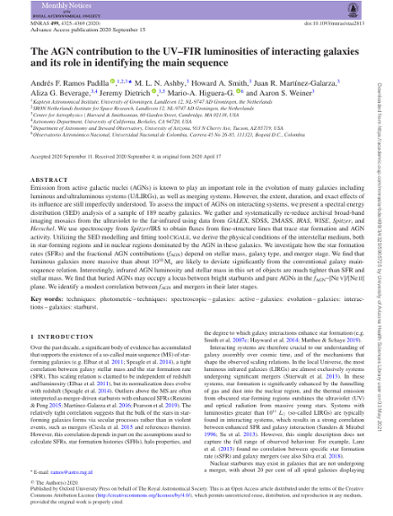 © The Author(s) 2020. Published by Oxford University Press on behalf of The Royal Astronomical Society. This is an Open Access article distributed under the terms of the Creative Commons Attribution License (http://creativecommons.org/licenses/by/4.0/).

Emission from active galactic nuclei (AGNs) is known to play an important role in the evolution of many galaxies including luminous and ultraluminous systems (U/LIRGs), as well as merging systems. However, the extent, duration, and exact effects of its influence are still imperfectly understood. To assess the impact of AGNs on interacting systems, we present a spectral energy distribution (SED) analysis of a sample of 189 nearby galaxies. We gather and systematically re-reduce archival broad-band imaging mosaics from the ultraviolet to the far-infrared using data from GALEX, SDSS, 2MASS, IRAS, WISE, Spitzer, and Herschel. We use spectroscopy from Spitzer/IRS to obtain fluxes from fine-structure lines that trace star formation and AGN activity. Utilizing the SED modelling and fitting tool CIGALE, we derive the physical conditions of the interstellar medium, both in star-forming regions and in nuclear regions dominated by the AGN in these galaxies. We investigate how the star formation rates (SFRs) and the fractional AGN contributions (f(AGN)) depend on stellar mass, galaxy type, and merger stage. We find that luminous galaxies more massive than about 10(10) M-* are likely to deviate significantly from the conventional galaxy mainsequence relation. Interestingly, infrared AGN luminosity and stellar mass in this set of objects are much tighter than SFR and stellar mass. We find that buried AGNs may occupy a locus between bright starbursts and pure AGNs in the f(AGN)-[Ne v]/[Ne II] plane. We identify a modest correlation between f(AGN) and mergers in their later stages.

Except where otherwise noted, this item's license is described as © The Author(s) 2020. Published by Oxford University Press on behalf of The Royal Astronomical Society. This is an Open Access article distributed under the terms of the Creative Commons Attribution License (http://creativecommons.org/licenses/by/4.0/).