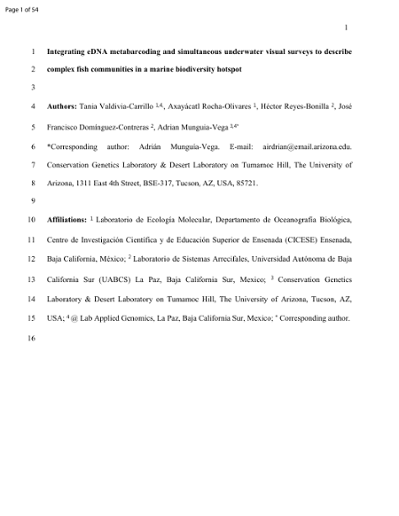 Marine biodiversity can be surveyed using underwater visual censuses and recently with eDNA metabarcoding. Although a promising tool, eDNA studies have shown contrasting results related to its detection scale and the number of species identified compared to other survey methods. Also, its accuracy relies on complete reference databases used for taxonomic assignment and, as other survey methods, species detection may show false-negative and false-positive errors. Here, we compared results from underwater visual censuses and simultaneous eDNA metabarcoding fish surveys in terms of observed species and community composition. We also assess the effect of a custom reference database in the taxonomic assignment, and evaluate occupancy, capture and detection probabilities, as well as error rates of eDNA survey data. We amplified a 12S rRNA fish barcode from 24 sampling sites in the gulf of California. More species were detected with eDNA metabarcoding than with UVC. Because each survey method largely detected different sets of species, the combined approach doubled the number of species registered. Both survey methods recovered a known biodiversity gradient and a biogeographic break, but eDNA captured diversity over a broader geographic and bathymetric scale. Furthermore, the use of a modest-sized custom reference database significantly increased taxonomic assignment. In a subset of species, occupancy models revealed eDNA surveys provided similar or higher detection probabilities compared to UVC. The occupancy value of each species had a large influence on eDNA detectability, and in the false positive and negative error. Overall, these results highlight the potential of eDNA metabarcoding in complementing other established ecological methods for studies of marine fishes. © 2021 John Wiley & Sons Ltd