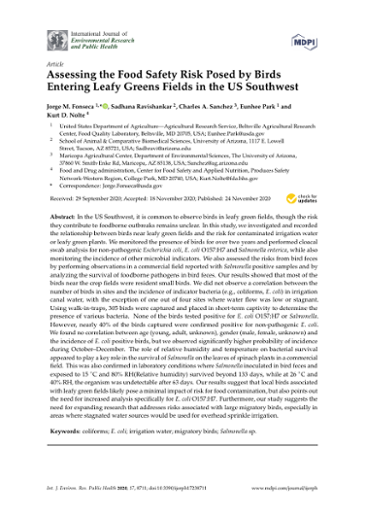 ©2020 by the authors. Licensee MDPI, Basel, Switzerland. This article is an open access article distributed under the terms and conditions of the Creative Commons Attribution (CC BY) license (http://creativecommons.org/licenses/by/4.0/).

In the US Southwest, it is common to observe birds in leafy green fields, though the risk they contribute to foodborne outbreaks remains unclear. In this study, we investigated and recorded the relationship between birds near leafy green fields and the risk for contaminated irrigation water or leafy green plants. We monitored the presence of birds for over two years and performed cloacal swab analysis for non-pathogenic Escherichia coli, E. coli O157:H7 and Salmonellaenterica, while also monitoring the incidence of other microbial indicators. We also assessed the risks from bird feces by performing observations in a commercial field reported with Salmonella positive samples and by analyzing the survival of foodborne pathogens in bird feces. Our results showed that most of the birds near the crop fields were resident small birds. We did not observe a correlation between the number of birds in sites and the incidence of indicator bacteria (e.g., coliforms, E. coli) in irrigation canal water, with the exception of one out of four sites where water flow was low or stagnant. Using walk-in-traps, 305 birds were captured and placed in short-term captivity to determine the presence of various bacteria. None of the birds tested positive for E. coli O157:H7 or Salmonella. However, nearly 40% of the birds captured were confirmed positive for non-pathogenic E. coli. We found no correlation between age (young, adult, unknown), gender (male, female, unknown) and the incidence of E. coli positive birds, but we observed significantly higher probability of incidence during October-December. The role of relative humidity and temperature on bacterial survival appeared to play a key role in the survival of Salmonella on the leaves of spinach plants in a commercial field. This was also confirmed in laboratory conditions where Salmonella inoculated in bird feces and exposed to 15 °C and 80% RH(Relative humidity) survived beyond 133 days, while at 26 °C and 40% RH, the organism was undetectable after 63 days. Our results suggest that local birds associated with leafy green fields likely pose a minimal impact of risk for food contamination, but also points out the need for increased analysis specifically for E. coli O157:H7. Furthermore, our study suggests the need for expanding research that addresses risks associated with large migratory birds, especially in areas where stagnated water sources would be used for overhead sprinkle irrigation.

Except where otherwise noted, this item's license is described as ©2020 by the authors. Licensee MDPI, Basel, Switzerland. This article is an open access article distributed under the terms and conditions of the Creative Commons Attribution (CC BY) license (http://creativecommons.org/licenses/by/4.0/).