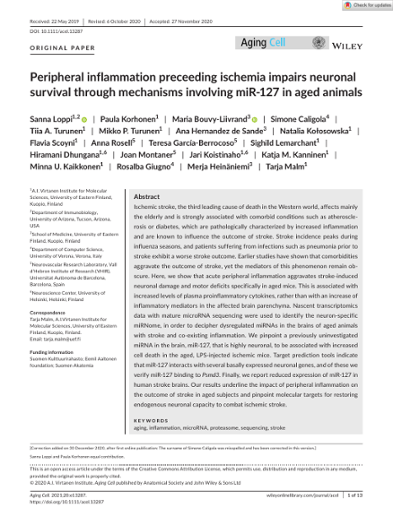 Department of Immunobiology, University of Arizona

Copyright © 2020 A.I. Virtanen Institute. Aging Cell published by Anatomical Society and John Wiley & Sons Ltd. This is an open access article under the terms of the Creative Commons Attribution License.

Ischemic stroke, the third leading cause of death in the Western world, affects mainly the elderly and is strongly associated with comorbid conditions such as atherosclerosis or diabetes, which are pathologically characterized by increased inflammation and are known to influence the outcome of stroke. Stroke incidence peaks during influenza seasons, and patients suffering from infections such as pneumonia prior to stroke exhibit a worse stroke outcome. Earlier studies have shown that comorbidities aggravate the outcome of stroke, yet the mediators of this phenomenon remain obscure. Here, we show that acute peripheral inflammation aggravates stroke-induced neuronal damage and motor deficits specifically in aged mice. This is associated with increased levels of plasma proinflammatory cytokines, rather than with an increase of inflammatory mediators in the affected brain parenchyma. Nascent transcriptomics data with mature microRNA sequencing were used to identify the neuron-specific miRNome, in order to decipher dysregulated miRNAs in the brains of aged animals with stroke and co-existing inflammation. We pinpoint a previously uninvestigated miRNA in the brain, miR-127, that is highly neuronal, to be associated with increased cell death in the aged, LPS-injected ischemic mice. Target prediction tools indicate that miR-127 interacts with several basally expressed neuronal genes, and of these we verify miR-127 binding to Psmd3. Finally, we report reduced expression of miR-127 in human stroke brains. Our results underline the impact of peripheral inflammation on the outcome of stroke in aged subjects and pinpoint molecular targets for restoring endogenous neuronal capacity to combat ischemic stroke. © 2020 A.I. Virtanen Institute. Aging Cell published by Anatomical Society and John Wiley & Sons Ltd

Except where otherwise noted, this item's license is described as Copyright © 2020 A.I. Virtanen Institute. Aging Cell published by Anatomical Society and John Wiley & Sons Ltd. This is an open access article under the terms of the Creative Commons Attribution License.