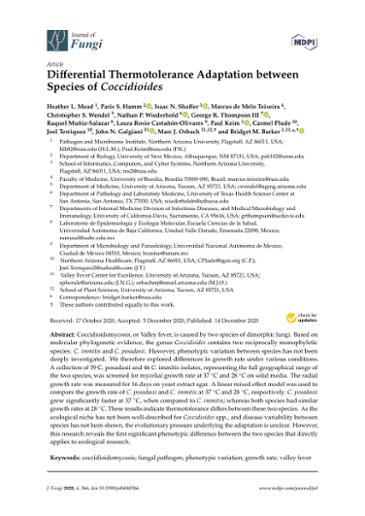 Copyright © 2020 by the authors. Licensee MDPI, Basel, Switzerland. This article is an open access article distributed under the terms and conditions of the Creative Commons Attribution (CC BY) license (http://creativecommons.org/licenses/by/4.0/).

Coccidioidomycosis, or Valley fever, is caused by two species of dimorphic fungi. Based on molecular phylogenetic evidence, the genus Coccidioides contains two reciprocally monophyletic species: C. immitis and C. posadasii. However, phenotypic variation between species has not been deeply investigated. We therefore explored differences in growth rate under various conditions. A collection of 39 C. posadasii and 46 C. immitis isolates, representing the full geographical range of the two species, was screened for mycelial growth rate at 37◦C and 28◦C on solid media. The radial growth rate was measured for 16 days on yeast extract agar. A linear mixed effect model was used to compare the growth rate of C. posadasii and C. immitis at 37◦C and 28◦C, respectively. C. posadasii grew significantly faster at 37◦C, when compared to C. immitis; whereas both species had similar growth rates at 28◦C. These results indicate thermotolerance differs between these two species. As the ecological niche has not been well-described for Coccidioides spp., and disease variability between species has not been shown, the evolutionary pressure underlying the adaptation is unclear. However, this research reveals the first significant phenotypic difference between the two species that directly applies to ecological research. © 2020 by the authors. Licensee MDPI, Basel, Switzerland.

Except where otherwise noted, this item's license is described as Copyright © 2020 by the authors. Licensee MDPI, Basel, Switzerland. This article is an open access article distributed under the terms and conditions of the Creative Commons Attribution (CC BY) license (http://creativecommons.org/licenses/by/4.0/).