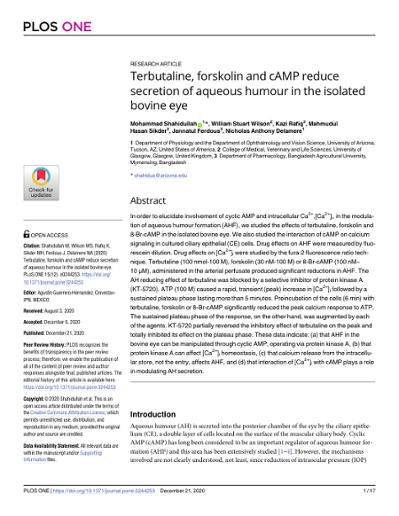 Copyright © 2020 Shahidullah et al. This is an open access article distributed under the terms of the Creative Commons Attribution License.

In order to elucidate involvement of cyclic AMP and intracellular Ca2+,[Ca2+]i, in the modulation of aqueous humour formation (AHF), we studied the effects of terbutaline, forskolin and 8-Br-cAMP in the isolated bovine eye. We also studied the interaction of cAMP on calcium signaling in cultured ciliary epithelial (CE) cells. Drug effects on AHF were measured by fluorescein dilution. Drug effects on [Ca2+]i were studied by the fura-2 fluorescence ratio technique. Terbutaline (100 nmol-100 M), forskolin (30 nM-100 M) or 8-Br-cAMP (100 nM–10 μM), administered in the arterial perfusate produced significant reductions in AHF. The AH reducing effect of terbutaline was blocked by a selective inhibitor of protein kinase A (KT-5720). ATP (100 M) caused a rapid, transient (peak) increase in [Ca2+]i followed by a sustained plateau phase lasting more than 5 minutes. Preincubation of the cells (6 min) with terbutaline, forskolin or 8-Br-cAMP significantly reduced the peak calcium response to ATP. The sustained plateau phase of the response, on the other hand, was augmented by each of the agents. KT-5720 partially reversed the inhibitory effect of terbutaline on the peak and totally inhibited its effect on the plateau phase. These data indicate: (a) that AHF in the bovine eye can be manipulated through cyclic AMP, operating via protein kinase A, (b) that protein kinase A can affect [Ca2+]i homeostasis, (c) that calcium release from the intracellular store, not the entry, affects AHF, and (d) that interaction of [Ca2+]i with cAMP plays a role in modulating AH secretion. © 2020 Shahidullah et al. This is an open access article distributed under the terms of the Creative Commons Attribution License, which permits unrestricted use, distribution, and reproduction in any medium, provided the original author and source are credited.

Except where otherwise noted, this item's license is described as Copyright © 2020 Shahidullah et al. This is an open access article distributed under the terms of the Creative Commons Attribution License.