Between Dreams and Reality: The Russian Diaspora in San Francisco, 1917-1957 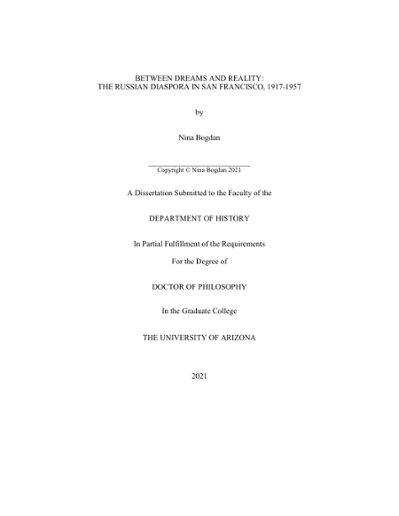 Through a study of the interwar and post-World War II Russian communities in San Francisco, this dissertation examines the processes of acculturation to American society of “White Russian” émigrés in the face of both nativist and political hostility beginning in the period following the First Red Scare (1919-1920) through the era of McCarthyism in the United States. These émigrés, largely but not exclusively Russian Orthodox, arrived in San Francisco in the wake of the Russian Civil War (1918-1922), the vast majority traveling from the Far East and settling in an urban space that included a long-established Russian Orthodox parish and two existing Russian communities: Spiritual Christian and Jewish, all formed prior to 1917. The incoming White Russian émigrés, in contrast to tropes identifying them as exiled aristocrats, were a heterogeneous group that included people from a range of social classes with varying political beliefs, whose origins spanned the range of the Russian Empire with many from the vast expanse of Siberia. Anticipating a collapse of the Bolshevik regime, émigré discourse initially referenced return to the homeland. The formation of the Soviet Union and subsequent related events, however, precluded such return, and most émigrés became U.S. citizens by the mid-1930s. The contradictions between intentions and actions speak to the complexity of the socio-political environment facing émigrés in the interwar period as well as the particularities of the spaces where they settled. Confusion and anxieties about Russian identity on the part of American dominant culture representatives engendered an émigré effort to explain that identity through cultural performance and display, a process often at odds with acculturation efforts. Concurrently, the on-going trauma caused by forced displacement from the homeland, hostility on the part of the host culture, and efforts to selectively acculturate while minimizing heritage loss served to intensify intra-Russian community conflict but also reinforced efforts of White Russians to define a developing Russian American identity on their terms. That process of identity formation took place in an “Imagined Russia,” encompassing the built urban environment of San Francisco and natural landscapes of northern California and Alaska, linking past to present through the nineteenth-century Russian Imperial project. The pressures of adjusting to American dominant culture norms, however, which emphasized the importance of selecting “whiteness,” a social construct of race, for Eastern European immigrants within the hierarchical racial structure, skewed Russian American identity into a specific circumscribed form over time. Cultural “Russianness” became devalued in favor of a pull towards homogeneity in line with dominant culture norms, a process many émigrés began inadvertently by immediately altering names to obscure Russian ancestry in the nativist environment of the interwar period. In the post-World War II era, when the established Russian community began to absorb a new wave of émigrés and Displaced Persons, a narrative characterizing Russian American identity as not only “anti-communist” but neo-monarchist also played a role in obscuring the heterogeneous nature of San Francisco’s interwar Russian community.