Zinc Management and Salt Tolerance of Pecan in Arid Regions 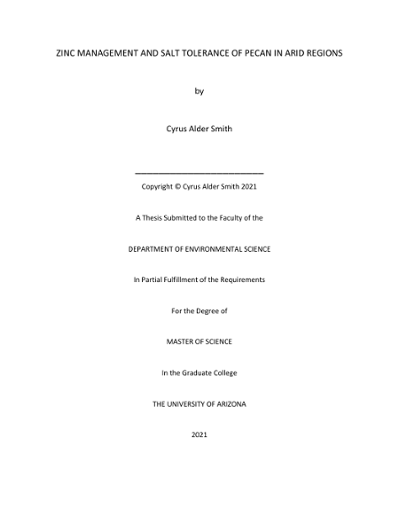 In the alkaline, calcareous soils common to the southwest zinc reacts with hydroxyl and carbonate groups forming compounds of low solubility, reducing its plant availability, and making soil application of zinc oxide (ZnO) or zinc sulfate (ZnSO4) impractical. Therefore, foliar application of zinc in southwestern pecan orchards is common practice. Fertigation with zinc-ethylenediaminetetraacetic acid (Zn-EDTA) is a possible alternative that has shown positive results in alkaline, calcareous soils. However, many growers fertigating their orchards with Zn-EDTA are still using supplemental zinc foliar sprays due to lack of confidence that soil applied Zn-EDTA can supply enough zinc to the trees. We conducted an experiment to determine if the application of foliar zinc sprays to ‘Wichita’ pecan trees already receiving zinc in the form of Zn-EDTA through fertigation would increase photosynthesis rates. We applied zinc sulfate monohydrate (ZnSO4·H2O), ZnSO4·H2O + Urea Ammonium Nitrate (UAN), Zn-EDTA, water alone, and water + UAN to seven ‘Wichita’ pecans growing in alkaline, calcareous soil in San Simon, AZ. Applications were made twice in 2018 and twice in 2019, Zn-EDTA was applied only in 2019. Photosynthesis measurements were taken approximately two to four weeks following each application. Mid-day stem water potential was also measured to verify that water stress was not limiting photosynthesis. Our results showed that photosynthesis rates were not increased by the application of supplemental foliar zinc sprays in trees fertigated with Zn-EDTA with mean leaf zinc concentrations of untreated leaves in the range of 16-21 mg·kg-1. We concluded that photosynthesis was not zinc limited and that no additional benefit was conferred with regard to photosynthesis from the application of supplemental foliar zinc sprays.Another problem for pecan growers in the southwest is high salt content in the soil. Very little experimentation has been conducted to determine pecan response to saline-sodic conditions. To contribute to this research, we performed an experiment with seven rootstock pecan seedlings grown in alkaline, calcareous, saline-sodic soil at the Safford Agricultural Center in Safford, AZ. The seedlings were chosen from different geographic regions. While we only have knowledge of the maternal genetics of the seedlings which were grown from open-pollinated seed, we hypothesized that seedlings with origins in regions with lower precipitation would be more tolerant of the experimental conditions than those from regions with higher precipitation. It was determined that leaf sodium concentration was more strongly correlated with salt injury in the plants than chlorine. Leaf potassium:sodium (K:Na) ratio was strongly correlated with resistance to salt injury, tree growth rates, and vigor. In support of our hypothesis we found the maternal parentage of the most tolerant seedlings in our experiment was ‘Elliott’, a cultivar with likely Mexican origins (although the ‘Elliott’ cultivar was a seedling selection from Florida). ‘Elliott’ generally outperformed the other seedlings in visual observations of resistance to salt injury and overall plant vigor and stood out with the greatest growth each year and cumulatively throughout the study. ‘Elliott’ had the highest K:Na ratio in 2019, shared the highest K:Na ratio in 2020 with ‘VC1-68’, was among the seedlings with the lowest leaf sodium concentrations during both years, and had the second lowest mortality of all the seedlings chosen. Another issue that pecan growers face is tree to tree variability that is reflected in nutrient acquisition within an orchard. It is important to have knowledge of variability so that each tree receives adequate nutrition. The orchard block mean leaf nutrient concentration should be high enough that all individual trees receive adequate nutrition. Practical leaf sampling of orchards requires sampling only a small portion of the trees randomly, and provides a mean value from which it is difficult to determine minimum (or maximum) nutrient concentrations extent in the sampled orchard block. To address this issue, a two-year experiment was conducted in an orchard in San Simon, AZ. The experimental plot consisted of ‘Wichita’ pecan pollinated with ‘Western’ (every fourth row). Soil and leaf samples were collected each year. Trunk measurements were made in the dormant seasons. Photosynthesis measurements of the ‘Wichita’ trees were made in 2019. The data were analyzed to determine magnitude and patterns of variability. Nutrient uptake varied between the cultivars. A lower mean and more variability in leaf zinc concentrations was found among the ‘Wichita’ trees than ‘Western’ during both years. We concluded that due to lack of variability sources within the orchard block, as well as finding little difference in row to row average mean leaf zinc concentrations, or in average mean leaf zinc concentrations of tree position within rows in either year, that position in the field was not the primary source of variability in leaf zinc concentration. From our 2019 data set we determined that a mean leaf zinc concentration of approximately 25 mg·kg-1 was needed to ensure that no more than 5% of the trees would fall below a target mean leaf zinc concentration (determined from previous research) of 15 mg·kg-1. This concentration is significantly lower than many published recommendations. Further, using the leaf nutrient with the highest coefficient of variance (zinc) for 2019 we determined a range of sample sizes and their associated relative margins of error from the true population mean. A sample size of 35 trees with a relative margin of error of 10% from the true population mean at 95% confidence is recommended for practical sampling purposes.