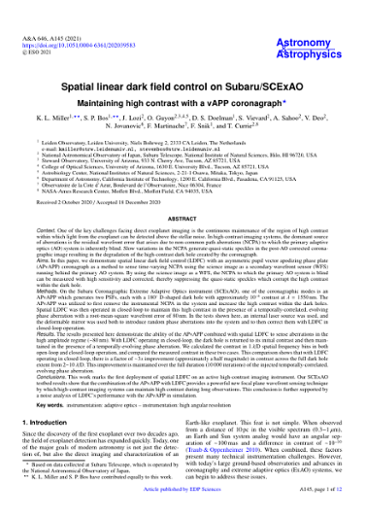 Context. One of the key challenges facing direct exoplanet imaging is the continuous maintenance of the region of high contrast within which light from the exoplanet can be detected above the stellar noise. In high-contrast imaging systems, the dominant source of aberrations is the residual wavefront error that arises due to non-common path aberrations (NCPA) to which the primary adaptive optics (AO) system is inherently blind. Slow variations in the NCPA generate quasi-static speckles in the post-AO corrected coronagraphic image resulting in the degradation of the high-contrast dark hole created by the coronagraph. Aims. In this paper, we demonstrate spatial linear dark field control (LDFC) with an asymmetric pupil vector apodizing phase plate (APvAPP) coronagraph as a method to sense time-varying NCPA using the science image as a secondary wavefront sensor (WFS) running behind the primary AO system. By using the science image as a WFS, the NCPA to which the primary AO system is blind can be measured with high sensitivity and corrected, thereby suppressing the quasi-static speckles which corrupt the high contrast within the dark hole. Methods. On the Subaru Coronagraphic Extreme Adaptive Optics instrument (SCExAO), one of the coronagraphic modes is an APvAPP which generates two PSFs, each with a 180° D-shaped dark hole with approximately 10-4 contrast at ? = 1550 nm. The APvAPP was utilized to first remove the instrumental NCPA in the system and increase the high contrast within the dark holes. Spatial LDFC was then operated in closed-loop to maintain this high contrast in the presence of a temporally-correlated, evolving phase aberration with a root-mean-square wavefront error of 80 nm. In the tests shown here, an internal laser source was used, and the deformable mirror was used both to introduce random phase aberrations into the system and to then correct them with LDFC in closed-loop operation. Results. The results presented here demonstrate the ability of the APvAPP combined with spatial LDFC to sense aberrations in the high amplitude regime (~80 nm). With LDFC operating in closed-loop, the dark hole is returned to its initial contrast and then maintained in the presence of a temporally-evolving phase aberration. We calculated the contrast in 1 ?/D spatial frequency bins in both open-loop and closed-loop operation, and compared the measured contrast in these two cases. This comparison shows that with LDFC operating in closed-loop, there is a factor of ~3x improvement (approximately a half magnitude) in contrast across the full dark hole extent from 2-10 ?/D. This improvement is maintained over the full duration (10 000 iterations) of the injected temporally-correlated, evolving phase aberration. Conclusions. This work marks the first deployment of spatial LDFC on an active high-contrast imaging instrument. Our SCExAO testbed results show that the combination of the APvAPP with LDFC provides a powerful new focal plane wavefront sensing technique by which high-contrast imaging systems can maintain high contrast during long observations. This conclusion is further supported by a noise analysis of LDFC's performance with the APvAPP in simulation. © ESO 2021.