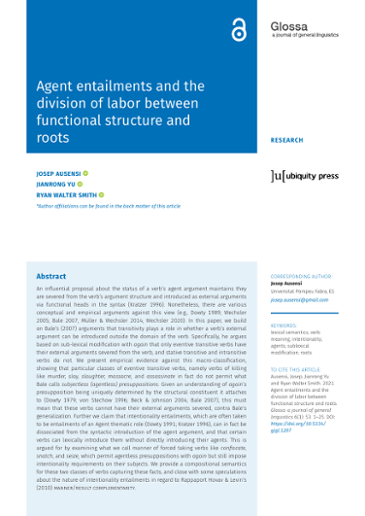 Copyright © 2021 The Author(s). This is an open-access article distributed under the terms of the Creative Commons Attribution 4.0 International License (CC-BY 4.0).

An influential proposal about the status of a verb's agent argument maintains they are severed from the verb's argument structure and introduced as external arguments via functional heads in the syntax (Kratzer 1996). Nonetheless, there are various conceptual and empirical arguments against this view (e.g., Dowty 1989; Wechsler 2005; Bale 2007; Müller & Wechsler 2014; Wechsler 2020). In this paper, we build on Bale's (2007) arguments that transitivity plays a role in whether a verb's external argument can be introduced outside the domain of the verb. Specifically, he argues based on sub-lexical modification with again that only eventive transitive verbs have their external arguments severed from the verb, and stative transitive and intransitive verbs do not. We present empirical evidence against this macro-classification, showing that particular classes of eventive transitive verbs, namely verbs of killing like murder, slay, slaughter, massacre, and assassinate in fact do not permit what Bale calls subjectless (agentless) presuppositions. Given an understanding of again's presupposition being uniquely determined by the structural constituent it attaches to (Dowty 1979; von Stechow 1996; Beck & Johnson 2004; Bale 2007), this must mean that these verbs cannot have their external arguments severed, contra Bale's generalization. Further we claim that intentionality entailments, which are often taken to be entailments of an Agent thematic role (Dowty 1991; Kratzer 1996), can in fact be dissociated from the syntactic introduction of the agent argument, and that certain verbs can lexically introduce them without directly introducing their agents. This is argued for by examining what we call manner of forced taking verbs like confiscate, snatch, and seize, which permit agentless presuppositions with again but still impose intentionality requirements on their subjects. We provide a compositional semantics for these two classes of verbs capturing these facts, and close with some speculations about the nature of intentionality entailments in regard to Rappaport Hovav & Levin's (2010) manner/result complementarity. © 2021 Academic Press. All rights reserved.

Except where otherwise noted, this item's license is described as Copyright © 2021 The Author(s). This is an open-access article distributed under the terms of the Creative Commons Attribution 4.0 International License (CC-BY 4.0).