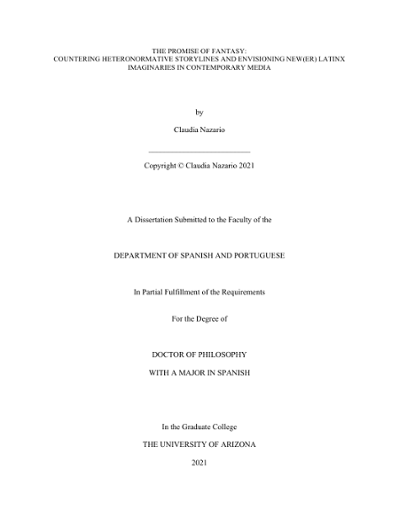 Drawing from interdisciplinary ideologies, I discuss written, audio, and visual storylines that center women and/or queer Latinxs while challenging heteronormative and ethnocentric tenets in mainstream media. My analysis focuses on the ways the media represent intersectional Latinx identities; I pay special attention to the complex interplay of ethnicity, race, gender, and sexuality. The purpose of this study is to explore how critical storytelling combats ethnocentric, racist, sexist, and homophobic norms promoted in the media. To that end, I compare critical retellings against their traditional versions by closely reading the former to analyze how Latinx representation is impacted by the complex ways a person’s identity categories act upon each other. To demonstrate the ubiquity of racist, sexist, ethnocentric, and homophobic storytelling in both classical and critical narratives, this dissertation analyzes different media (i.e. children’s literature, Television programming, and music) by content creators from three geographic locations (i.e. Cuba, Brazil, and the U.S.) using English, Spanglish, Spanish and /or Portuguese. Chapter I provides an overview of the socializing functions of children’s literature, and a discussion of Había una vez a Spanish-language Cuban fairy tale series written with a multiethnic and feminist perspective. From my analysis, I determine that inserting marginalized individuals into dominant narratives results in stereotypical or prejudicial representations that justify dominant cultures and Eurocentric ideologies established during colonialism. Chapter II focuses on an examination of gender variance in Brazilian telenovelas and eletrofunk music that are broadcasted in Portuguese. The discussion in this chapter demonstrates that reworked storylines or retellings do not transcend biases in mainstream narratives when marginalized characters substitute standard or dominant protagonists. Instead, these types of substitutions communicate to audiences that power is attainable through assimilation to heteronormative and ethnocentric constructs—validating binary gender, compulsory heterosexuality, and European beauty standards. In Chapter III, I discuss the representation of U.S. Latinxs in U.S. media and focus on the five Latinx-focused television series of 2018, particularly on the show Vida’s ability to transcend ethnic and gender biases. I use Vida’s storytelling advances and limitations to delineate three praxes for critical storytelling designed to navigate narratives away from oppressive social norms and the type of storytelling they seek to challenge. I argue for critical storytelling to undertake all of the following three praxes: (1) have groups represented in numerical parity in all aspects of storytelling, (2) present narratives that deconstruct the social logic of oppressive norms, and (3) create new social imaginaries transcending oppressive storytelling and social norms. In other words, I argue for critical narratives written for, by, and about the groups being depicted to counter prejudices, homogenizing troupes, and stereotypes that are employed by traditional storytelling. Secondly, I propose that narratives directly challenge prejudicial ideologies and highlight power inequalities woven into dominant cultures and the media. Lastly, I argue that narratives provide new possible futures for marginalized groups by creating new imaginaries or looking to those of marginalized groups as viable alternatives. Thus, critical retellings can be realized by tapping into the promise of fantasy, an ever-present creative potential and the genre’s driving characteristic—creating the yet unknown.