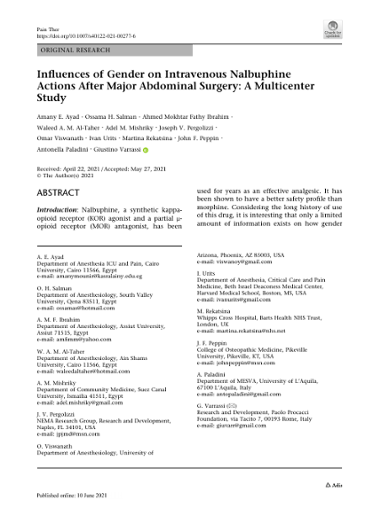 Department of Anesthesiology, University of Arizona

Copyright © The Author(s) 2021. This article is licensed under a Creative Commons Attribution-NonCommercial 4.0 International License.

Introduction: Nalbuphine, a synthetic kappa-opioid receptor (KOR) agonist and a partial µ-opioid receptor (MOR) antagonist, has been used for years as an effective analgesic. It has been shown to have a better safety profile than morphine. Considering the long history of use of this drug, it is interesting that only a limited amount of information exists on how gender differences influence nalbuphine responses. In this randomized double-blind comparative trial after major abdominal surgery, the analgesic effects of two doses of continuous intravenous infusion of nalbuphine were evaluated based on gender. Methods: Enrolled patients were divided into four groups (two females and two males with 32 patients in each group). Two of them (groups A1 and A2), one male and one female, received postoperative continuous intravenous infusions of nalbuphine at 2 mg/h via patient-controlled analgesia (PCA). Each patient had the potential of receiving a rescue bolus of 1 mg of nalbuphine with a lock out time of 15 min. The other two groups (groups B1 and B2) received half the infusion dose, 1 mg/h, and half the nalbuphine rescue dose with the PCA pump, 0.5 mg maximum every 15 min as needed. Patients' vital signs, numerical pain rating scores, rescue nalbuphine, and incidence of side effects were assessed immediately after the operation, and every 3 h during the first 12 h. Results: Nalbuphine 2 mg/h dosing led to significantly lower pain scores amongst females compared to males at 6, 9, and 12 h; while the 1 mg/h infusion pain scores were only lower at the 9-h time period. Females receiving the nalbuphine 2 mg dose at 6 h, and the 1 mg dose at 6, 9, and 12-h measurements needed significantly lower doses of rescue nalbuphine. Females on the 1 mg dose experienced significantly more nausea, vomiting, and sedation at the 6-, 9-, and 12-h measurement times. In the multivariate analysis, female gender was a negative predictor at all measurement times. Conclusions: The current study supports the hypothesis that although nalbuphine was found to be an effective and well-tolerated analgesic after major abdominal surgery, females were statistically more responsive than males. Trial Registration: The study was registered at the Pan African Clinical trials Registry PACTR201304000486309, and approved for the Ethical aspects. © 2021, The Author(s).

Except where otherwise noted, this item's license is described as Copyright © The Author(s) 2021. This article is licensed under a Creative Commons Attribution-NonCommercial 4.0 International License.