Orbital Influence on Precipitation, Fire, and Grass Community Composition From 1.87 to 1.38 Ma in the Turkana Basin, Kenya 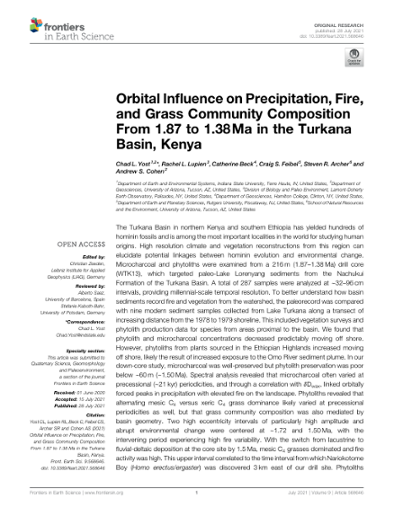 Copyright © 2021 Yost, Lupien, Beck, Feibel, Archer and Cohen. This is an open access article distributed under the terms of the Creative Commons Attribution License (CC BY).

The Turkana Basin in northern Kenya and southern Ethiopia has yielded hundreds of hominin fossils and is among the most important localities in the world for studying human origins. High resolution climate and vegetation reconstructions from this region can elucidate potential linkages between hominin evolution and environmental change. Microcharcoal and phytoliths were examined from a 216 m (1.87–1.38 Ma) drill core (WTK13), which targeted paleo-Lake Lorenyang sediments from the Nachukui Formation of the Turkana Basin. A total of 287 samples were analyzed at ∼32–96 cm intervals, providing millennial-scale temporal resolution. To better understand how basin sediments record fire and vegetation from the watershed, the paleorecord was compared with nine modern sediment samples collected from Lake Turkana along a transect of increasing distance from the 1978 to 1979 shoreline. This included vegetation surveys and phytolith production data for species from areas proximal to the basin. We found that phytolith and microcharcoal concentrations decreased predictably moving off shore. However, phytoliths from plants sourced in the Ethiopian Highlands increased moving off shore, likely the result of increased exposure to the Omo River sediment plume. In our down-core study, microcharcoal was well-preserved but phytolith preservation was poor below ∼60 m (∼1.50 Ma). Spectral analysis revealed that microcharcoal often varied at precessional (∼21 kyr) periodicities, and through a correlation with δDwax, linked orbitally forced peaks in precipitation with elevated fire on the landscape. Phytoliths revealed that alternating mesic C4 versus xeric C4 grass dominance likely varied at precessional periodicities as well, but that grass community composition was also mediated by basin geometry. Two high eccentricity intervals of particularly high amplitude and abrupt environmental change were centered at ∼1.72 and 1.50 Ma, with the intervening period experiencing high fire variability. With the switch from lacustrine to fluvial-deltaic deposition at the core site by 1.5 Ma, mesic C4 grasses dominated and fire activity was high. This upper interval correlated to the time interval from which Nariokotome Boy (Homo erectus/ergaster) was discovered 3 km east of our drill site. Phytoliths indicated a seasonally wet and open landscape dominated by xeric C4 grasses, sedges, and other herbaceous plants. © Copyright © 2021 Yost, Lupien, Beck, Feibel, Archer and Cohen.

Except where otherwise noted, this item's license is described as Copyright © 2021 Yost, Lupien, Beck, Feibel, Archer and Cohen. This is an open access article distributed under the terms of the Creative Commons Attribution License (CC BY).