Coping with Complexity: Essays on Evolution and Institutions 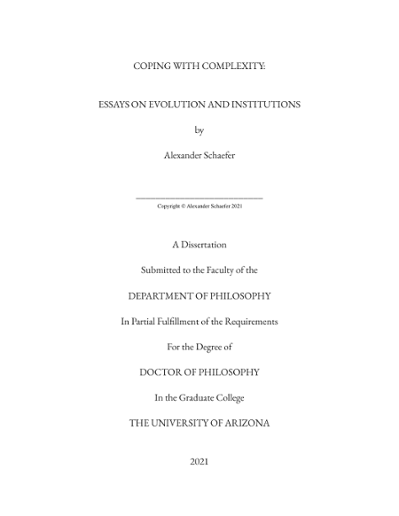 Despite their disparate subjects, the following essays share a number of common themes. Chief among these are complexity, evolution, and institutions. The first two essays examine Hayek's social theory, an examination that brings to light two basic points about complex societies. First, they are difficult to predict and control. Second, they adapt to internal and external changes. These features lay the groundwork for section II, which examines the proper form of governance structures for a complex, adaptive society. The first essay of part II applies multilevel selection theory to the problem of governing complexity. It concludes that polycentric political organization, supplemented by a few additional ``design principles,'' facilitates a socially beneficial process of competition and evolution. The second essay of part II uncovers a related benefit of polycentric governance. Due to its decentralized and competitive nature and due to the vast amount of relevant and constantly changing information generated in a complex society, polycentric governance institutions utilize information more effectively than centralized modes of governance. There is a substantial welfare benefit to utilizing this information by implementing reforms that seek to address the concerns and satisfy the preferences of millions, or perhaps billions, of citizens. Moreover, centralized governance becomes increasingly difficult as increasing numbers of increasingly interdependent variables become relevant to any given problem. Polycentricity is an adaptation of the state in response to the problem of social complexity. Like biological adaptations, this adaptation may be blind and unintentional. It may even precede the phenomenon to which it proves adaptive. Yet, it is adaptive nonetheless, since it provides an effective response to the problems posed by its environment. Finally, part III begins to examine some of the normative, philosophical consequences of these social scientific investigations. If society is in a constant state of flux, if it is evolving in response to fluctuating variables, then the traditional task of political philosophy may stand in need of amendment. Philosophers from Plato to Rawls have attempted to characterize a conception of justice, a political summum bonum, that transcends the institutional variations of time and place. If justice is, at least in part, a project of reconciliation, and if the values held by citizens continue to evolve, then there may not be a stable conception of justice that transcends societal dynamism. We may, instead, need to content ourselves with identifying certain general desiderata that better enable society to coordinate on a shared conception of justice, however ephemeral this conception might prove to be.