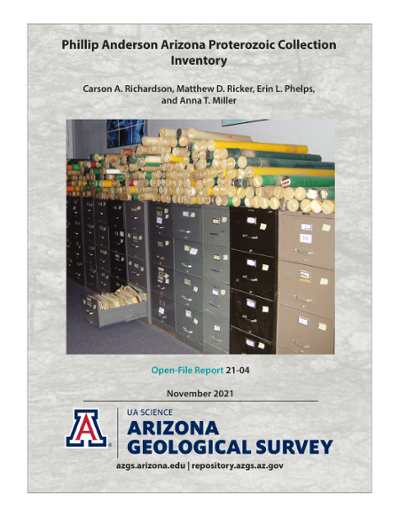 Phillip Anderson conducted a comprehensive study of the Proterozoic geology, tectonics, and mineral deposits of the Southwest, focused on Arizona. He started his studies upon arrival at the University of Arizona in the early 1970s, beginning a PhD in the Department of Geosciences. As part of this expansive project, Phil visited and studied nearly every exposure of Proterozoic rocks in Arizona. These studies ranged from detailed quadrangle-scale mapping of large areas to regional reconnaissance accompanied by air-photo interpretation. Phil also collected and geochemically analyzed samples of key rock units, focusing on Proterozoic volcanic and plutonic rocks and their metamorphosed equivalents. He also collected large amounts of structural data, such as orientations of foliation and lineation. In 1986, he completed his dissertation (Anderson, 1986), which summarized his tectonic and geologic synthesis of the early Proterozoic rocks of Arizona. In essence, his dissertation consisted of the two papers by Phil in the Geologic Evolution of Arizona book (Anderson, 1989, 1989b). His conclusions in his dissertation and in Geologic Evolution of Arizona were based on his detailed and reconnaissance mapping. Page-sized compilation maps were included in both publications, but the detailed maps were not. During and after work on his dissertation and his contribution to Geologic Evolution of Arizona, Phil continued work in the Proterozoic of the Southwest as part of his continuing personal studies and as a consultant for mineral exploration companies. He also worked on other projects, such as groundwater resources in the Transition Zone and uranium in sedimentary rocks of Central Arizona (Anderson and Wirth, 1981). At various stages during his research, Phil compiled a series of intermediate-scale geologic and tectonic maps, such as ones covering the area between Prescott and Black Canyon City and in the region between the Verde Valley and Young, Arizona. Phil passed away at the age of 62 in 2012. Subsequent to his passing, his widow, Donna Smart, arranged to have Phil’s maps transferred to the Arizona Geological Survey. This collection of maps was substantial, requiring multiple trips from Payson to Tucson. Once the maps were at the Arizona Geologic Survey, we sorted the maps into various categories. Some maps were essentially complete geologic maps of quadrangles, and we concluded that these maps should be released. Some maps were less complete but still had significant amounts of original geologic research; some of these maps will be included in the Anderson archive, but many others will remain in the files of the AZGS as either scanned facsimiles or as paper maps. In addition, we decided that some of Phil’s compilation maps were also complete and well enough documented to release. A fourth category of map represented work that Phil had done as a consultant for clients, and as such these maps contain proprietary information, including Phil’s contract mapping and his compilation of mapping done by company geologists. We are assessing whether some of these maps can be released once we have obtained permission from the rightful owners of the information. In August 2020, AZGS undertook an inventory of the physical files funded by the U.S. Geological Survey’s National Geological and Geophysical Data Preservation Program (NGGDPP) with matching funds provided from Arizona Geological Survey’s line-item appropriation under the University of Arizona budget. Several students employed by the Arizona Geological Survey worked diligently on this for the next twelve months under the supervision of the senior author. Items inventoried include mining records, reports, maps, cross sections, and geophysical surveys. AZGS created a record for each item. This includes authorship, geographic location, descriptions, thematic keywords, spatial keywords, temporal keywords. AZGS hopes to use this catalog to identify unique data that is unavailable elsewhere for digitization in future preservation projects to make this data available to the public once again.