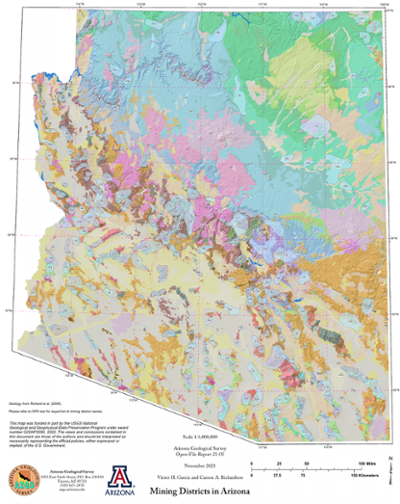 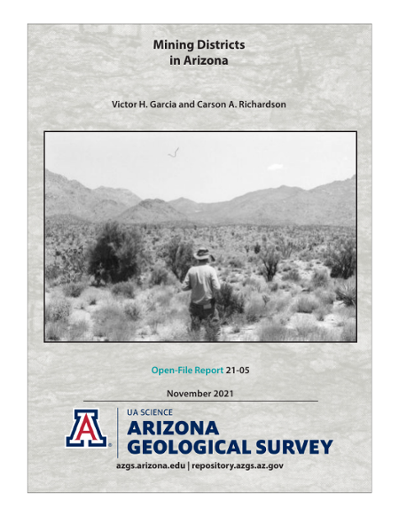 Arizona’s long history of exploration and mining has resulted in the development of mineral resources across the state. By convention, individual prospects, deposits, and mines into mining districts as an organizational framework to refer to prospective areas for economic mineralization. However, there are no strict definitions of what constitute a mining district other than evidence of mineral potential. Thus, mining districts reflect areas with known mineralization, have diffuse boundaries, and may change over time as new discoveries are made. Mining districts provide a useful framework for both geologists and hobbyists for organizing information, with the past county reports on mineral resources organized from a district perspective (Keith, 1973, 1974, 1975, 1978). However, the lack of a consistent definition for a mining district means that a shared understanding is lacking when communicating with others about a district’s geology or history. This is most apparent when comparing the past two mining district maps of Arizona (Wilson et al., 1961; Keith et al., 1983). The Wilson et al. (1961) map of mining districts took the approach that districts have diffuse boundaries, showing no boundaries on the map with only the approximate location of district shown via a keyed number. The Keith et al. (1986) map utilized discrete boundary of not mining districts, but mineral districts. The Keith et al. (1986) mineral districts outlined areas of known mineralization and categorized mineralized areas based on the dominant metal and style of mineralization. The Keith et al. (1986) map efficiently displays where ores of specific metals can be found across Arizona, but parsing out this detail results in a significant increase in the number of districts. This framework was furthered in a GIS compilation by Richard (2002). One of the aims of the Bedrock Geology and Mineral Resources section of the Arizona Geological Survey is to produce a new series on the mineral resources of each county, organized around mining districts of each county. With that in mind, mining districts were revisited and redefined to provide a foundation to develop more rigorous compilations of data in future projects. The results of this revisiting of Arizona’s mining districts are displayed on the associated map plate and keyed to the list that follow this section. Alongside this effort, AZGS is pursuing additional ways to deliver mineral resource information to the public. An ArcOnline webmap (https://arcg.is/1TLeXe) using the newly redefined mining districts as a framework, has been developed to accomplish this aim. Using this webmap, users will be able to view compiled information on deposits and prospects in each district, view publicly available and published company reports, and ultimately link to donated materials currently hosted at AZGS’s Mine Data website. While still in its nascent form with only limited data available, this webmap will be annually updated with new data as each county report on mineral resources is completed. The first new report on the Mineral Resources of Pinal County is expected to be published in late autumn 2022.