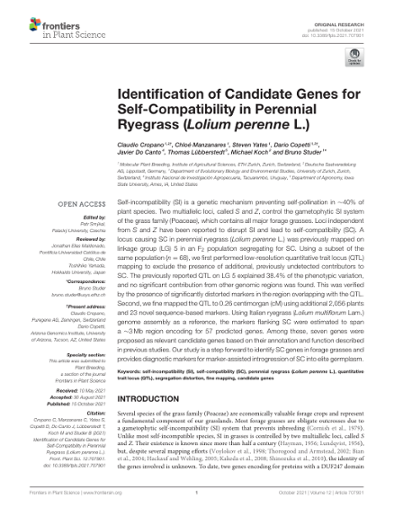 Copyright © 2021 Cropano, Manzanares, Yates, Copetti, Do Canto, Lübberstedt, Koch and Studer. This is an open-access article distributed under the terms of the Creative Commons Attribution License (CC BY).

Self-incompatibility (SI) is a genetic mechanism preventing self-pollination in ~40% of plant species. Two multiallelic loci, called S and Z, control the gametophytic SI system of the grass family (Poaceae), which contains all major forage grasses. Loci independent from S and Z have been reported to disrupt SI and lead to self-compatibility (SC). A locus causing SC in perennial ryegrass (Lolium perenne L.) was previously mapped on linkage group (LG) 5 in an F2 population segregating for SC. Using a subset of the same population (n = 68), we first performed low-resolution quantitative trait locus (QTL) mapping to exclude the presence of additional, previously undetected contributors to SC. The previously reported QTL on LG 5 explained 38.4% of the phenotypic variation, and no significant contribution from other genomic regions was found. This was verified by the presence of significantly distorted markers in the region overlapping with the QTL. Second, we fine mapped the QTL to 0.26 centimorgan (cM) using additional 2,056 plants and 23 novel sequence-based markers. Using Italian ryegrass (Lolium multiflorum Lam.) genome assembly as a reference, the markers flanking SC were estimated to span a ~3 Mb region encoding for 57 predicted genes. Among these, seven genes were proposed as relevant candidate genes based on their annotation and function described in previous studies. Our study is a step forward to identify SC genes in forage grasses and provides diagnostic markers for marker-assisted introgression of SC into elite germplasm. © Copyright © 2021 Cropano, Manzanares, Yates, Copetti, Do Canto, Lübberstedt, Koch and Studer.

Except where otherwise noted, this item's license is described as Copyright © 2021 Cropano, Manzanares, Yates, Copetti, Do Canto, Lübberstedt, Koch and Studer. This is an open-access article distributed under the terms of the Creative Commons Attribution License (CC BY).