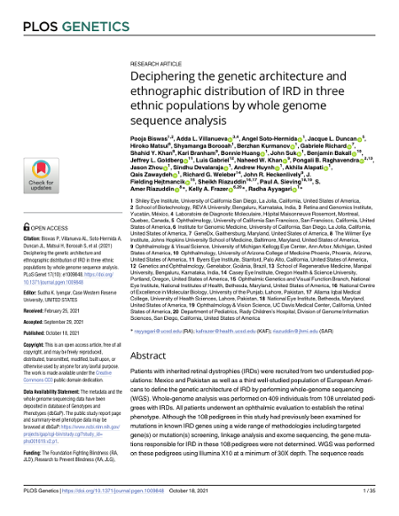 This is an open access article, free of all copyright, and may be freely reproduced, distributed, transmitted, modified, built upon, or otherwise used by anyone for any lawful purpose. The work is made available under the Creative Commons CC0 public domain dedication.

Patients with inherited retinal dystrophies (IRDs) were recruited from two understudied populations: Mexico and Pakistan as well as a third well-studied population of European Americans to define the genetic architecture of IRD by performing whole-genome sequencing (WGS). Whole-genome analysis was performed on 409 individuals from 108 unrelated pedigrees with IRDs. All patients underwent an ophthalmic evaluation to establish the retinal phenotype. Although the 108 pedigrees in this study had previously been examined for mutations in known IRD genes using a wide range of methodologies including targeted gene(s) or mutation(s) screening, linkage analysis and exome sequencing, the gene mutations responsible for IRD in these 108 pedigrees were not determined. WGS was performed on these pedigrees using Illumina X10 at a minimum of 30X depth. The sequence reads were mapped against hg19 followed by variant calling using GATK. The genome variants were annotated using SnpEff, PolyPhen2, and CADD score; the structural variants (SVs) were called using GenomeSTRiP and LUMPY. We identified potential causative sequence alterations in 62 pedigrees (58%), including 41 novel and 53 reported variants in IRD genes. For 58 of these pedigrees the observed genotype was consistent with the initial clinical diagnosis, the remaining 4 had the clinical diagnosis reclassified based on our findings. In eight pedigrees (13%) we observed atypical causal variants, i.e. unexpected genotype(s), including 5 pedigrees with causal variants in more than one IRD gene within all affected family members, one pedigree with intrafamilial genetic heterogeneity (different affected family members carrying causal variants in different IRD genes), one pedigree carrying a dominant causative variant present in pseudo-recessive form due to consanguinity and one pedigree with a de-novo variant in the affected family member. Combined atypical and large structural variants contributed to about 21% of cases. Among the novel mutations, 75% were detected in Mexican and 53% found in European American pedigrees and have not been reported in any other population while only 20% were detected in Pakistani pedigrees and were not previously reported. The remaining novel IRD causative variants were listed in gnomAD but were found to be very rare and population specific. Mutations in known IRD associated genes contributed to pathology in 63% Mexican, 60% Pakistani and 48% European American pedigrees analyzed. Overall, contribution of known IRD gene variants to disease pathology in these three populations was similar to that observed in other populations worldwide. This study revealed a spectrum of mutations contributing to IRD in three populations, identified a large proportion of novel potentially causative variants that are specific to the corresponding population or not reported in gnomAD and shed light on the genetic architecture of IRD in these diverse global populations. Copyright: This is an open access article, free of all copyright, and may be freely reproduced, distributed, transmitted, modified, built upon, or otherwise used by anyone for any lawful purpose. The work is made available under the Creative Commons CC0 public domain dedication.

Except where otherwise noted, this item's license is described as This is an open access article, free of all copyright, and may be freely reproduced, distributed, transmitted, modified, built upon, or otherwise used by anyone for any lawful purpose. The work is made available under the Creative Commons CC0 public domain dedication.