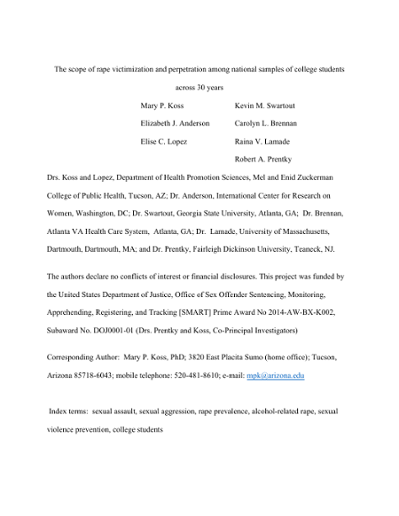 Research Questions: Rape prevention practice and policy have roots in data from 1985. This study uses 2015 national data to project recent prevalence, assesses whether rates now differ from those of 30 years ago, and disaggregates 2015 prevalence into rape of alcohol incapacitated victims, rapes combining both alcohol and physical tactics, and violent rape. Methods: Cross-sectional analyses were conducted comparing two national samples. The first was collected in 1984-85 (Koss, Gidycz, & Wisniewski, 1987); the second was collected 30 years later in 2014-2015. Both surveys used in-person administration and measurement by the most current version at the time of the Sexual Experiences Survey (SES). Prevalence rates were compared using Bayesian binomial tests. Results: In 2015, 33.4% (1 in 3) of women reported experiencing rape or attempted rape and 12.7% of men reported perpetration (1 in 8). Using Jeffreys' label for effect size of the Bayes binomial (1961), both results are “decisively” greater than expected given the 1985 benchmarks of 27.9% for victimization and 7.7% for perpetration. Victimization when incapacitated characterized approximately 75% of incidents in 2015 up from 50% in 1985. Cautions apply as cross-sectional data does not establish causality and the recent data set involved the revised SES. Conclusions: Across 30 years, neither containment nor reduction of rape was demonstrated and the increasingly prominent association with alcohol was apparent. Among the men who disclosed raping, 9 of 10 incidents were alcohol-involved. Prevention focus might profitably be directed to constraining alcohol environments and policies that facilitate rape of incapacitated persons and on misconduct responses that are proportional to the harm caused to rape victims, thereby raising the perceived risks of perpetration.