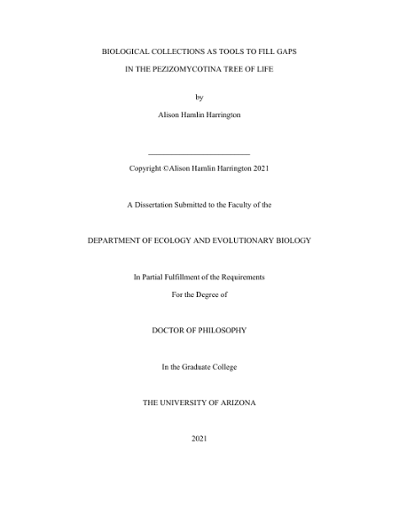 Fungi represent one of the most species rich lineages of Life. However, the majority of fungal biodiversity is undescribed, precluding inference of the distributions, ecological and morphological traits, and evolution of many fungal taxa. The increasing accessibility of sequencing technology and prevalence of large-scale metabarcoding studies have advanced fungal systematics and ecological inference, and sequence data have become the primary means by which fungi are identified. Typically, these methods use sequence data from a specific ‘barcode’ locus for identification, which is then compared to a reference database of barcode sequences annotated with taxonomic names to estimate identity. Yet, accurate and precise sequence-based identification of fungi remain elusive, with studies often generating sequences that cannot be identified with any precision. In this dissertation, I use a synthesis of traditional taxonomic methods and data derived from molecular ecology, multi-locus sequencing, genomics, and bioassays to explore the limitations of and opportunities to improve sequence-based identification of fungi, particularly in the context of ecological studies. I describe three novel taxa, all of which were previously collected during ecological studies conducted by other authors and deposited as unidentified vouchers in a culture collection. To evaluate the precision of methods that rely on barcode sequence similarity to identify and infer ecological guild of unknown samples, I first used morphological, phenotypic, and molecular methods to characterize strains of Coniochaeta with highly similar barcode sequences to two described species in the genus. Coniochaeta is one of the most frequently isolated genera of plant-associated fungi in temperate biomes, though little is known about how these fungi affect the fitness of their host plants. Using in vitro assays, phylogenetic analyses of two loci, and analyses of genome data newly generated by a collaborative team for this project, my coauthors and I designated these strains as a novel species, Coniochaeta endophytica sp. nov. This work demonstrates that using barcode sequence data alone to identify fungi to the species level can underestimate species richness. To infer whether unidentifiable sequences are derived from truly novel taxa or are artifacts of incomplete reference databases, I next mined a biodiversity collection derived from culture-based ecological studies of plant-associated microfungi. I used a synthesis of similarity-based and phylogenetic methods to infer whether the isolates represented truly novel lineages, were taxa that lacked barcode sequence data, or were taxa in need of greater sequence annotation in reference databases. My coauthors and I found that many ‘unidentifiable’ fungi were present in the biodiversity collection, some of which could be identified to a known order, family, or genus with little additional data or effort. However, the majority could not be meaningfully identified using only sequence data from loci commonly sequenced in the context of ecological studies. These unknown taxa require additional data derived from a specimen or culture to resolve, highlighting the potential for ecological studies that include a culturing step to facilitate resolution of challenging, unidentifiable taxa. As a case study in using collections to resolve an ‘unidentifiable’ fungal isolate from a lineage previously considered unculturable, I used traditional morphological methods to place the isolate in the context of known fungal taxa and phylogenetic methods to infer its classification. I found that although the isolate was morphologically consistent with the genus Linocarpon, it was closely related to the recently described Cryptophyllachora, with which the isolate shares few morphological and ecological traits. My coauthors and I describe a new species and genus and accommodate both genera in a new family. Finally, to expand knowledge of the distribution, ecological traits, and evolution of a described genus with little available sequence data, I described a new species of Acrogenospora isolated from seeds of forest trees in Panama. This genus is poorly represented in sequence databases, and isolates from Panama were not identifiable beyond the class level with barcode sequence data alone. I used data from metabarcoding studies to infer a pantropic distribution for the genus. My coauthors and I present a new species that expands the known diversity of ecological modes in Acrogenospora and facilitates future identifications of a widespread, morphologically distinctive genus.