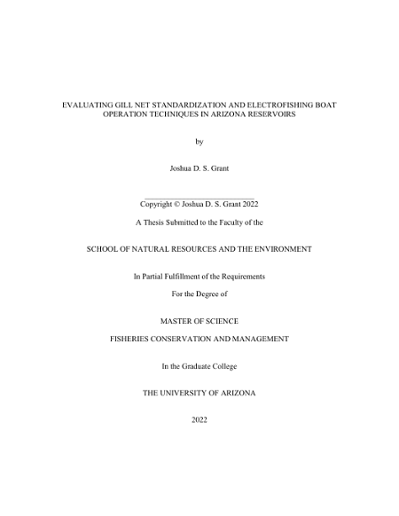 I conducted a paired-gear comparison study in large standing warmwater reservoirs in Arizona during fall 2020 and spring 2021 between Arizona Game and Fish Department (AZGFD) standard gill net (Arizona net) and the American Fisheries Society (AFS) standard gill net (AFS net). The Arizona net and AFS net share the same height, hanging ratio, and twine sizes but differ in length, number of panels, and panel bar-mesh sizes. Adopting a national standard gear like the AFS gill net would allow AZGFD to use a uniform net methodology across the state, give the ability to compare data with other states that use the AFS standards, and allow for larger scale analyses. In five large lakes (Alamo, Apache, Bartlett, Pleasant, and Roosevelt) I investigated how each net was different or similar with regards to species diversity, pick and pull times, catch per unit effort (CPUE), and length structure. I also set out to create conversion factors to allow AZGFD to convert data from the Arizona net to be compared with the AFS net. I found that the AFS net caught the same species as the Arizona net, however, the Arizona net caught three additional species than the AFS net. The AFS net averaged about six and a half minutes faster to pick and pull per net than the Arizona net. For CPUE, the AFS net was higher for some species while the Arizona net was higher for others. Overall the Arizona net CPUE was greater than the AFS net. In both cases, the difference in fish caught per net was often minimal. For length frequencies, each net caught the same length ranges but had some differences in proportions of fish sizes. Lastly, I successfully developed CPUE conversion factors, although, fit of the model differed by species. Fisheries managers should recognize that each net does have biases with regards to using one net over the other for management goals. Further paired-gear testing between Arizona and AFS gill nets will add useful information to reliably help AZGFD convert to the AFS standard.Coincidingly in the spring of 2021, I conducted a boat electrofishing study comparing three boat maneuvers and pedal operations for completing transect surveys. In the same five large reservoirs, I sampled using a continuous 600 s pedal-down transect parallel to shore (continuous parallel); an intermittent 10 s on 10 s off 600 s pedal-down transect parallel to shore (intermittent parallel); and 600 s pedal down transect with multiple arcs applying power only when incoming to shore/cover (arc intermittent) and compared their total time and distance per transect, CPUE of fish per hour and per m, and length frequencies. I found on average, continuous parallel took the least amount of time while arc intermittent took the least amount of distance to complete a 600 s pedal-down transect. For CPUE (fish/hr) there was evidence of differences for three species being higher in arc intermittent than in the other methods, which were similar, but no differences among any of the methods for five other species. For CPUE (fish/m) there was strong evidence for differences among multiple methods being higher than others for all species but two. Lastly, I found that each method caught the same size ranges of fish, however, some differences in proportions of sizes in some species were evident. Overall, each of the three electrofishing approaches tested should work well for documenting reservoir fish populations in general, but certain species and sizes may be best quantified using just one of the three approaches.