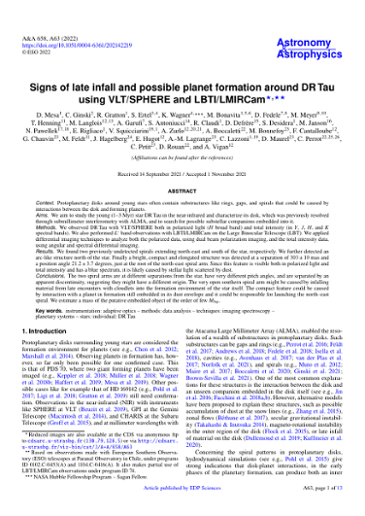 Context. Protoplanetary disks around young stars often contain substructures like rings, gaps, and spirals that could be caused by interactions between the disk and forming planets. Aims. We aim to study the young (1-3 Myr) star DR Tau in the near-infrared and characterize its disk, which was previously resolved through submillimeter interferometry with ALMA, and to search for possible substellar companions embedded into it. Methods. We observed DR Tau with VLT/SPHERE both in polarized light (H broad band) and total intensity (in Y, J, H, and K spectral bands). We also performed L′ band observations with LBTI/LMIRCam on the Large Binocular Telescope (LBT). We applied differential imaging techniques to analyze both the polarized data, using dual beam polarization imaging, and the total intensity data, using angular and spectral differential imaging. Results. We found two previously undetected spirals extending north-east and south of the star, respectively. We further detected an arc-like structure north of the star. Finally a bright, compact and elongated structure was detected at a separation of 303 ± 10 mas and a position angle 21.2 ± 3.7 degrees, just at the root of the north-east spiral arm. Since this feature is visible both in polarized light and total intensity and has a blue spectrum, itis likely caused by stellar light scattered by dust. Conclusions. The two spiral arms are at different separations from the star, have very different pitch angles, and are separated by an apparent discontinuity, suggesting they might have a different origin. The very open southern spiral arm might be caused by infalling material from late encounters with cloudlets into the formation environment of the star itself. The compact feature could be caused by interaction with a planet in formation still embedded in its dust envelope and it could be responsible for launching the north-east spiral. We estimate a mass of the putative embedded object of the order of few MJup. © 2022 ESO.