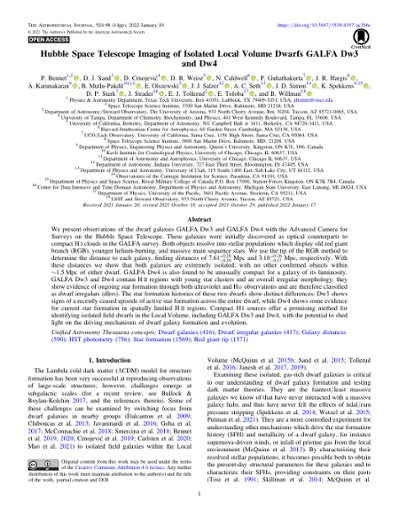 Department of Astronomy/Steward Observatory, The University of Arizona

Copyright © 2022. The Author(s). Published by the American Astronomical Society. Original content from this work may be used under the terms of the Creative Commons Attribution 4.0 licence.

We present observations of the dwarf galaxies GALFA Dw3 and GALFA Dw4 with the Advanced Camera for Surveys on the Hubble Space Telescope. These galaxies were initially discovered as optical counterparts to compact H i clouds in the GALFA survey. Both objects resolve into stellar populations which display old red giant branch (RGB), younger helium-burning, and massive main sequence stars. We use the tip of the RGB method to determine the distance to each galaxy, finding distances of Mpc and Mpc, respectively. With these distances we show that both galaxies are extremely isolated, with no other confirmed objects within ∼1.5 Mpc of either dwarf. GALFA Dw4 is also found to be unusually compact for a galaxy of its luminosity. GALFA Dw3 and Dw4 contain H ii regions with young star clusters and an overall irregular morphology; they show evidence of ongoing star formation through both ultraviolet and Hα observations and are therefore classified as dwarf irregulars (dIrrs). The star formation histories of these two dwarfs show distinct differences: Dw3 shows signs of a recently ceased episode of active star formation across the entire dwarf, while Dw4 shows some evidence for current star formation in spatially limited H ii regions. Compact H i sources offer a promising method for identifying isolated field dwarfs in the Local Volume, including GALFA Dw3 and Dw4, with the potential to shed light on the driving mechanisms of dwarf galaxy formation and evolution. © 2022. The Author(s). Published by the American Astronomical Society.

Except where otherwise noted, this item's license is described as Copyright © 2022. The Author(s). Published by the American Astronomical Society. Original content from this work may be used under the terms of the Creative Commons Attribution 4.0 licence.