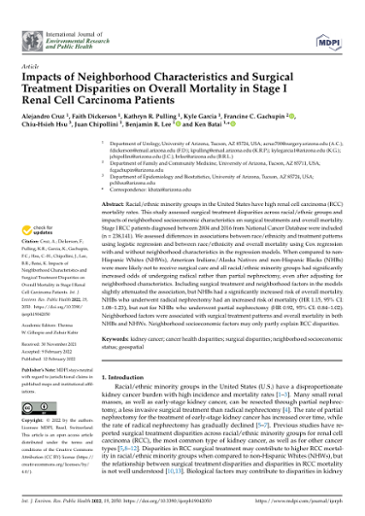 Copyright © 2022 by the authors. Licensee MDPI, Basel, Switzerland. This article is an open access article distributed under the terms and conditions of the Creative Commons Attribution (CC BY) license (https://creativecommons.org/licenses/by/4.0/).

Racial/ethnic minority groups in the United States have high renal cell carcinoma (RCC) mortality rates. This study assessed surgical treatment disparities across racial/ethnic groups and impacts of neighborhood socioeconomic characteristics on surgical treatments and overall mortality. Stage I RCC patients diagnosed between 2004 and 2016 from National Cancer Database were included (n = 238,141). We assessed differences in associations between race/ethnicity and treatment patterns using logistic regression and between race/ethnicity and overall mortality using Cox regression with and without neighborhood characteristics in the regression models. When compared to non-Hispanic Whites (NHWs), American Indians/Alaska Natives and non-Hispanic Blacks (NHBs) were more likely not to receive surgical care and all racial/ethnic minority groups had significantly increased odds of undergoing radical rather than partial nephrectomy, even after adjusting for neighborhood characteristics. Including surgical treatment and neighborhood factors in the models slightly attenuated the association, but NHBs had a significantly increased risk of overall mortality. NHBs who underwent radical nephrectomy had an increased risk of mortality (HR 1.15, 95% CI: 1.08–1.23), but not for NHBs who underwent partial nephrectomy (HR 0.92, 95% CI: 0.84–1.02). Neighborhood factors were associated with surgical treatment patterns and overall mortality in both NHBs and NHWs. Neighborhood socioeconomic factors may only partly explain RCC disparities. © 2022 by the authors. Licensee MDPI, Basel, Switzerland.

Except where otherwise noted, this item's license is described as Copyright © 2022 by the authors. Licensee MDPI, Basel, Switzerland. This article is an open access article distributed under the terms and conditions of the Creative Commons Attribution (CC BY) license (https://creativecommons.org/licenses/by/4.0/).