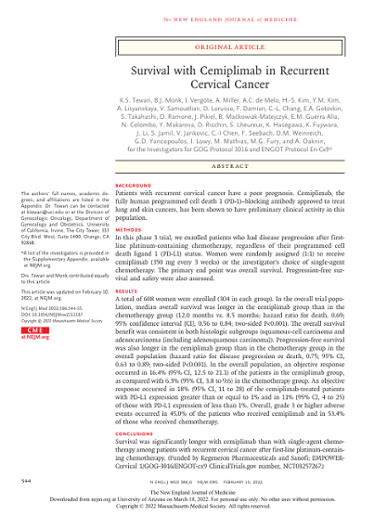 The New England journal of medicine

BACKGROUND: Patients with recurrent cervical cancer have a poor prognosis. Cemiplimab, the fully human programmed cell death 1 (PD-1)-blocking antibody approved to treat lung and skin cancers, has been shown to have preliminary clinical activity in this population. METHODS: In this phase 3 trial, we enrolled patients who had disease progression after first-line platinum-containing chemotherapy, regardless of their programmed cell death ligand 1 (PD-L1) status. Women were randomly assigned (1:1) to receive cemiplimab (350 mg every 3 weeks) or the investigator's choice of single-agent chemotherapy. The primary end point was overall survival. Progression-free survival and safety were also assessed. RESULTS: A total of 608 women were enrolled (304 in each group). In the overall trial population, median overall survival was longer in the cemiplimab group than in the chemotherapy group (12.0 months vs. 8.5 months; hazard ratio for death, 0.69; 95% confidence interval [CI], 0.56 to 0.84; two-sided P<0.001). The overall survival benefit was consistent in both histologic subgroups (squamous-cell carcinoma and adenocarcinoma [including adenosquamous carcinoma]). Progression-free survival was also longer in the cemiplimab group than in the chemotherapy group in the overall population (hazard ratio for disease progression or death, 0.75; 95% CI, 0.63 to 0.89; two-sided P<0.001). In the overall population, an objective response occurred in 16.4% (95% CI, 12.5 to 21.1) of the patients in the cemiplimab group, as compared with 6.3% (95% CI, 3.8 to 9.6) in the chemotherapy group. An objective response occurred in 18% (95% CI, 11 to 28) of the cemiplimab-treated patients with PD-L1 expression greater than or equal to 1% and in 11% (95% CI, 4 to 25) of those with PD-L1 expression of less than 1%. Overall, grade 3 or higher adverse events occurred in 45.0% of the patients who received cemiplimab and in 53.4% of those who received chemotherapy. CONCLUSIONS: Survival was significantly longer with cemiplimab than with single-agent chemotherapy among patients with recurrent cervical cancer after first-line platinum-containing chemotherapy.