Effects of harvest date and growth stage on triticale forages in the southwest USA: Kinetics of in vitro disappearance of fiber and dry matter 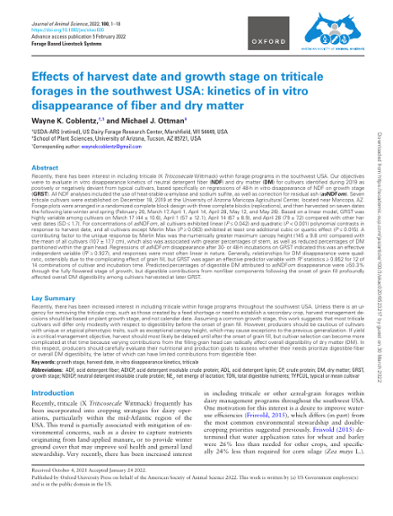 Published by Oxford University Press on behalf of the American Society of Animal Science 2022. This work is written by (a) US Government employee(s) and is in the public domain in the US.

Recently, there has been interest in including triticale (X Triticosecale Wittmack) within forage programs in the southwest USA. Our objectives were to evaluate in vitro disappearance kinetics of neutral detergent fiber (NDF) and dry matter (DM) for cultivars identified during 2019 as positively or negatively deviant from typical cultivars, based specifically on regressions of 48-h in vitro disappearance of NDF on growth stage (GRST). All NDF analyses included the use of heat-stable α-amylase and sodium sulfite, as well as correction for residual ash (asNDFom). Seven triticale cultivars were established on December 18, 2019 at the University of Arizona Maricopa Agricultural Center, located near Maricopa, AZ. Forage plots were arranged in a randomized complete block design with three complete blocks (replications), and then harvested on seven dates the following late-winter and spring (February 26, March 17, April 1, April 14, April 28, May 12, and May 26). Based on a linear model, GRST was highly variable among cultivars on March 17 (44 ± 10.6), April 1 (57 ± 12.1), April 14 (67 ± 8.9), and April 28 (79 ± 7.2) compared with other harvest dates (SD ≤ 1.7). For concentrations of asNDFom, all cultivars exhibited linear (P ≤ 0.042) and quadratic (P < 0.001) polynomial contrasts in response to harvest date, and all cultivars except Merlin Max (P ≥ 0.063) exhibited at least one additional cubic or quartic effect (P ≤ 0.015). A contributing factor to the unique response by Merlin Max was the numerically greater maximum canopy height (145 ± 9.8 cm) compared with the mean of all cultivars (107 ± 17.7 cm), which also was associated with greater percentages of stem, as well as reduced percentages of DM partitioned within the grain head. Regressions of asNDFom disappearance after 30- or 48-h incubations on GRST indicated this was an effective independent variable (R2 ≥ 0.927), and responses were most often linear in nature. Generally, relationships for DM disappearance were quadratic, ostensibly due to the complicating effect of grain fill, but GRST was again an effective predictor variable with R2 statistics ≥ 0.852 for 12 of 14 combinations of cultivar and incubation time. Predicted percentages of digestible DM attributed to asNDFom disappearance were ≥50.3% through the fully flowered stage of growth, but digestible contributions from nonfiber components following the onset of grain fill profoundly affected overall DM digestibility among cultivars harvested at later GRST. Published by Oxford University Press on behalf of the American Society of Animal Science 2022.Recently, there has been increased interest in including triticale within forage programs throughout the southwest USA. Unless there is an urgency for removing the triticale crop, such as those created by a feed shortage or need to establish a secondary crop, harvest management decisions should be based on plant growth stage, and not calendar date. Assuming a common growth stage, this work suggests that most triticale cultivars will differ only modestly with respect to digestibility before the onset of grain fill. However, producers should be cautious of cultivars with unique or atypical phenotypic traits, such as exceptional canopy height, which may cause exceptions to the previous generalization. If yield is a critical management objective, harvest should most likely be delayed until after the onset of grain fill, but cultivar selection can become more complicated at that time because varying contributions from the filling grain head can radically affect overall digestibility of dry matter (DM). In this respect, producers should carefully evaluate their nutritional and production goals to assess whether their needs prioritize digestible fiber or overall DM digestibility, the latter of which can have limited contributions from digestible fiber.

Except where otherwise noted, this item's license is described as Published by Oxford University Press on behalf of the American Society of Animal Science 2022. This work is written by (a) US Government employee(s) and is in the public domain in the US.