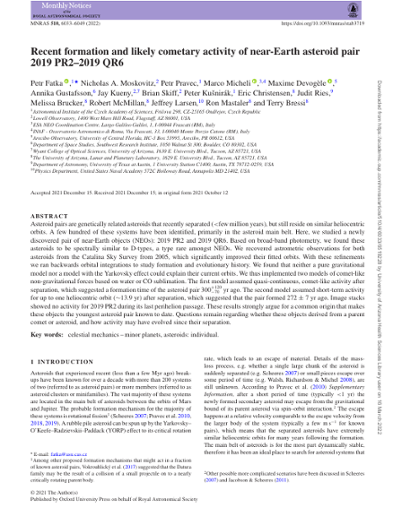 Asteroid pairs are genetically related asteroids that recently separated (<few million years), but still reside on similar heliocentric orbits. A few hundred of these systems have been identified, primarily in the asteroid main belt. Here, we studied a newly discovered pair of near-Earth objects (NEOs): 2019 PR2 and 2019 QR6. Based on broad-band photometry, we found these asteroids to be spectrally similar to D-types, a type rare amongst NEOs. We recovered astrometric observations for both asteroids from the Catalina Sky Survey from 2005, which significantly improved their fitted orbits. With these refinements we ran backwards orbital integrations to study formation and evolutionary history. We found that neither a pure gravitational model nor a model with the Yarkovsky effect could explain their current orbits. We thus implemented two models of comet-like non-gravitational forces based on water or CO sublimation. The first model assumed quasi-continuous, comet-like activity after separation, which suggested a formation time of the asteroid pair $300^{+120}_{-70}$ yr ago. The second model assumed short-term activity for up to one heliocentric orbit (∼13.9 yr) after separation, which suggested that the pair formed 272 ± 7 yr ago. Image stacks showed no activity for 2019 PR2 during its last perihelion passage. These results strongly argue for a common origin that makes these objects the youngest asteroid pair known to date. Questions remain regarding whether these objects derived from a parent comet or asteroid, and how activity may have evolved since their separation. © 2021 The Author(s).