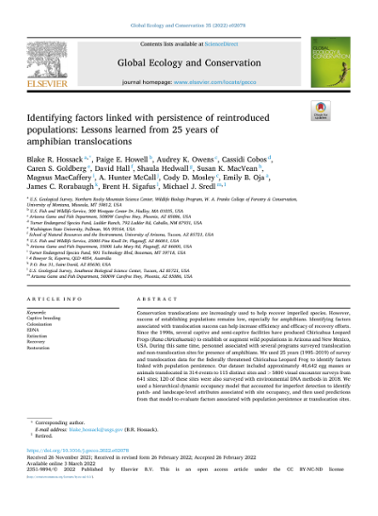 Copyright © 2022 Published by Elsevier B.V. This is an open access article under the CC BY-NC-ND license.

Conservation translocations are increasingly used to help recover imperiled species. However, success of establishing populations remains low, especially for amphibians. Identifying factors associated with translocation success can help increase efficiency and efficacy of recovery efforts. Since the 1990s, several captive and semi-captive facilities have produced Chiricahua Leopard Frogs (Rana chiricahuensis) to establish or augment wild populations in Arizona and New Mexico, USA. During this same time, personnel associated with several programs surveyed translocation and non-translocation sites for presence of amphibians. We used 25 years (1995–2019) of survey and translocation data for the federally threatened Chiricahua Leopard Frog to identify factors linked with population persistence. Our dataset included approximately 40,642 egg masses or animals translocated in 314 events to 115 distinct sites and > 5800 visual encounter surveys from 641 sites; 120 of these sites were also surveyed with environmental DNA methods in 2018. We used a hierarchical dynamic occupancy model that accounted for imperfect detection to identify patch- and landscape-level attributes associated with site occupancy, and then used predictions from that model to evaluate factors associated with population persistence at translocation sites. Across all sites, extinction probability for Chiricahua Leopard Frogs was higher in lotic (stream) than lentic (pond) habitats and when Western Tiger Salamanders (Ambystoma mavortium) were present. Restoration of sites specifically for frog conservation reduced extinction probability. Colonization of unoccupied sites increased moderately with increasing numbers of translocation sites within 2 km, indicating a benefit of translocation efforts beyond sites where frogs were stocked. At translocation sites, persistence was greater in lentic than lotic habitats and was negatively correlated with the proportion of years tiger salamanders were present. Increasing numbers of translocation events, especially of late-stage larvae, increased persistence. There was little difference in population persistence based on whether stock was from captive, semi-captive, or wild sources, but translocations during the dry season (January[sbnd]July) succeeded more than those after the typical arrival of summer rains (August[sbnd]December). Based on the number of years translocation sites were predicted to be occupied, 2 or more translocations produced, on average, a > 4-yr increase in predicted occupancy compared to sites without translocations. While translocations have increased the number of populations across the landscape, continued management of water availability and threats such as invasive predators and disease remain critical to recovery of the Chiricahua Leopard Frog. © 2022

Except where otherwise noted, this item's license is described as Copyright © 2022 Published by Elsevier B.V. This is an open access article under the CC BY-NC-ND license.