Orbital controls on eastern African hydroclimate in the Pleistocene 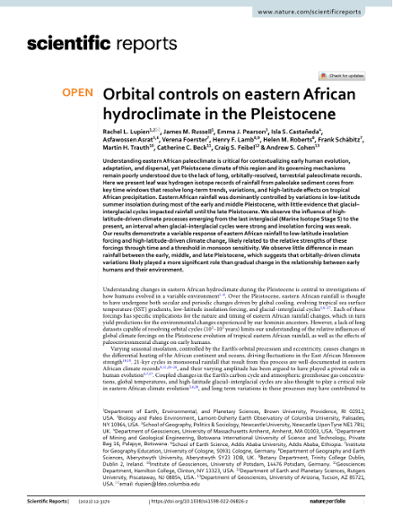 Department of Geosciences, University of Arizona

Copyright © The Author(s) 2022. This article is licensed under a Creative Commons Attribution 4.0 International License.

Understanding eastern African paleoclimate is critical for contextualizing early human evolution, adaptation, and dispersal, yet Pleistocene climate of this region and its governing mechanisms remain poorly understood due to the lack of long, orbitally-resolved, terrestrial paleoclimate records. Here we present leaf wax hydrogen isotope records of rainfall from paleolake sediment cores from key time windows that resolve long-term trends, variations, and high-latitude effects on tropical African precipitation. Eastern African rainfall was dominantly controlled by variations in low-latitude summer insolation during most of the early and middle Pleistocene, with little evidence that glacial–interglacial cycles impacted rainfall until the late Pleistocene. We observe the influence of high-latitude-driven climate processes emerging from the last interglacial (Marine Isotope Stage 5) to the present, an interval when glacial–interglacial cycles were strong and insolation forcing was weak. Our results demonstrate a variable response of eastern African rainfall to low-latitude insolation forcing and high-latitude-driven climate change, likely related to the relative strengths of these forcings through time and a threshold in monsoon sensitivity. We observe little difference in mean rainfall between the early, middle, and late Pleistocene, which suggests that orbitally-driven climate variations likely played a more significant role than gradual change in the relationship between early humans and their environment. © 2022, The Author(s).

Except where otherwise noted, this item's license is described as Copyright © The Author(s) 2022. This article is licensed under a Creative Commons Attribution 4.0 International License.