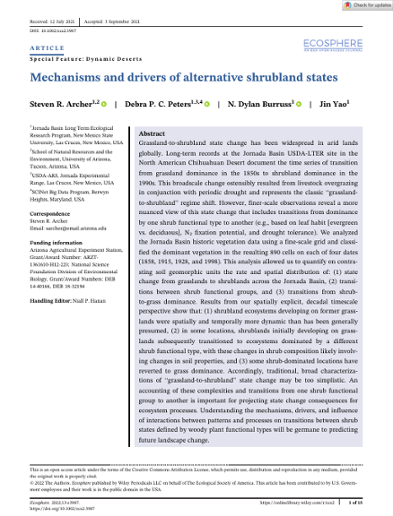 © 2022 The Authors. Ecosphere published by Wiley Periodicals LLC on behalf of The Ecological Society of America. This article has been contributed to by U.S. Government employees and their work is in the public domain in the USA. This is an open access article under the terms of the Creative Commons Attribution License.

Grassland-to-shrubland state change has been widespread in arid lands globally. Long-term records at the Jornada Basin USDA-LTER site in the North American Chihuahuan Desert document the time series of transition from grassland dominance in the 1850s to shrubland dominance in the 1990s. This broadscale change ostensibly resulted from livestock overgrazing in conjunction with periodic drought and represents the classic “grassland-to-shrubland” regime shift. However, finer-scale observations reveal a more nuanced view of this state change that includes transitions from dominance by one shrub functional type to another (e.g., based on leaf habit [evergreen vs. deciduous], N2 fixation potential, and drought tolerance). We analyzed the Jornada Basin historic vegetation data using a fine-scale grid and classified the dominant vegetation in the resulting 890 cells on each of four dates (1858, 1915, 1928, and 1998). This analysis allowed us to quantify on contrasting soil geomorphic units the rate and spatial distribution of: (1) state change from grasslands to shrublands across the Jornada Basin, (2) transitions between shrub functional groups, and (3) transitions from shrub-to-grass dominance. Results from our spatially explicit, decadal timescale perspective show that: (1) shrubland ecosystems developing on former grasslands were spatially and temporally more dynamic than has been generally presumed, (2) in some locations, shrublands initially developing on grasslands subsequently transitioned to ecosystems dominated by a different shrub functional type, with these changes in shrub composition likely involving changes in soil properties, and (3) some shrub-dominated locations have reverted to grass dominance. Accordingly, traditional, broad characterizations of “grassland-to-shrubland” state change may be too simplistic. An accounting of these complexities and transitions from one shrub functional group to another is important for projecting state change consequences for ecosystem processes. Understanding the mechanisms, drivers, and influence of interactions between patterns and processes on transitions between shrub states defined by woody plant functional types will be germane to predicting future landscape change.

Except where otherwise noted, this item's license is described as © 2022 The Authors. Ecosphere published by Wiley Periodicals LLC on behalf of The Ecological Society of America. This article has been contributed to by U.S. Government employees and their work is in the public domain in the USA. This is an open access article under the terms of the Creative Commons Attribution License.