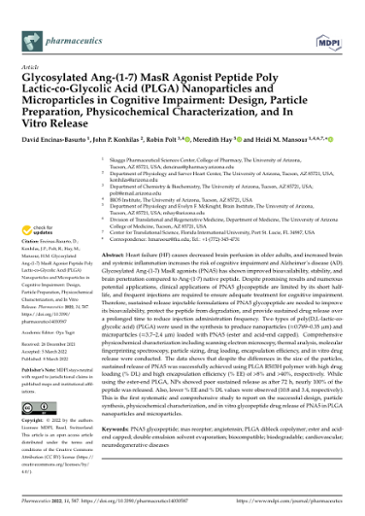 Copyright © 2022 by the authors. Licensee MDPI, Basel, Switzerland. This article is an open access article distributed under the terms and conditions of the Creative Commons Attribution (CC BY) license (https://creativecommons.org/licenses/by/4.0/).

Heart failure (HF) causes decreased brain perfusion in older adults, and increased brain and systemic inflammation increases the risk of cognitive impairment and Alzheimer’s disease (AD). Glycosylated Ang-(1-7) MasR agonists (PNA5) has shown improved bioavailability, stability, and brain penetration compared to Ang-(1-7) native peptide. Despite promising results and numerous potential applications, clinical applications of PNA5 glycopeptide are limited by its short half-life, and frequent injections are required to ensure adequate treatment for cognitive impairment. Therefore, sustained-release injectable formulations of PNA5 glycopeptide are needed to improve its bioavailability, protect the peptide from degradation, and provide sustained drug release over a prolonged time to reduce injection administration frequency. Two types of poly (D, L-lactic-co-glycolic acid) (PLGA) were used in the synthesis to produce nanoparticles (≈0.769–0.35 µm) and microparticles (≈3.7–2.4 µm) loaded with PNA5 (ester and acid-end capped). Comprehensive physicochemical characterization including scanning electron microscopy, thermal analysis, molecular fingerprinting spectroscopy, particle sizing, drug loading, encapsulation efficiency, and in vitro drug release were conducted. The data shows that despite the differences in the size of the particles, sustained release of PNA5 was successfully achieved using PLGA R503H polymer with high drug loading (% DL) and high encapsulation efficiency (% EE) of >8% and >40%, respectively. While using the ester-end PLGA, NPs showed poor sustained release as after 72 h, nearly 100% of the peptide was released. Also, lower % EE and % DL values were observed (10.8 and 3.4, respectively). This is the first systematic and comprehensive study to report on the successful design, particle synthesis, physicochemical characterization, and in vitro glycopeptide drug release of PNA5 in PLGA nanoparticles and microparticles. © 2022 by the authors. Licensee MDPI, Basel, Switzerland.

Except where otherwise noted, this item's license is described as Copyright © 2022 by the authors. Licensee MDPI, Basel, Switzerland. This article is an open access article distributed under the terms and conditions of the Creative Commons Attribution (CC BY) license (https://creativecommons.org/licenses/by/4.0/).