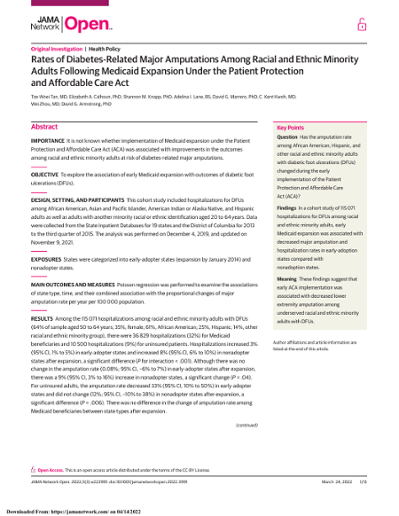 Copyright © 2022 Tan TW et al. This is an open access article distributed under the terms of the CC-BY License.

Importance: It is not known whether implementation of Medicaid expansion under the Patient Protection and Affordable Care Act (ACA) was associated with improvements in the outcomes among racial and ethnic minority adults at risk of diabetes-related major amputations. Objective: To explore the association of early Medicaid expansion with outcomes of diabetic foot ulcerations (DFUs). Design, Setting, and Participants: This cohort study included hospitalizations for DFUs among African American, Asian and Pacific Islander, American Indian or Alaska Native, and Hispanic adults as well as adults with another minority racial or ethnic identification aged 20 to 64 years. Data were collected from the State Inpatient Databases for 19 states and the District of Columbia for 2013 to the third quarter of 2015. The analysis was performed on December 4, 2019, and updated on November 9, 2021. Exposures: States were categorized into early-adopter states (expansion by January 2014) and nonadopter states. Main Outcomes and Measures: Poisson regression was performed to examine the associations of state type, time, and their combined association with the proportional changes of major amputation rate per year per 100000 population. Results: Among the 115071 hospitalizations among racial and ethnic minority adults with DFUs (64% of sample aged 50 to 64 years; 35%, female; 61%, African American; 25%, Hispanic; 14%, other racial and ethnic minority group), there were 36829 hospitalizations (32%) for Medicaid beneficiaries and 10500 hospitalizations (9%) for uninsured patients. Hospitalizations increased 3% (95% CI, 1% to 5%) in early-adopter states and increased 8% (95% CI, 6% to 10%) in nonadopter states after expansion, a significant difference (P for interaction <.001). Although there was no change in the amputation rate (0.08%; 95% CI, -6% to 7%) in early-adopter states after expansion, there was a 9% (95% CI, 3% to 16%) increase in nonadopter states, a significant change (P =.04). For uninsured adults, the amputation rate decreased 33% (95% CI, 10% to 50%) in early-adopter states and did not change (12%; 95% CI, -10% to 38%) in nonadopter states after expansion, a significant difference (P =.006). There was no difference in the change of amputation rate among Medicaid beneficiaries between state types after expansion. Conclusions and Relevance: This study found a relative improvement in the major amputation rate among African American, Hispanic, and other racial and ethnic minority adults in early-expansion states compared with nonexpansion states, which could be because of the recruitment of at-risk uninsured adults into the Medicaid program during the first 2 years of ACA implementation. Future study is required to evaluate the long-term association of Medicaid expansion and the rates of amputation.. © 2022 American Medical Association. All rights reserved.

Except where otherwise noted, this item's license is described as Copyright © 2022 Tan TW et al. This is an open access article distributed under the terms of the CC-BY License.