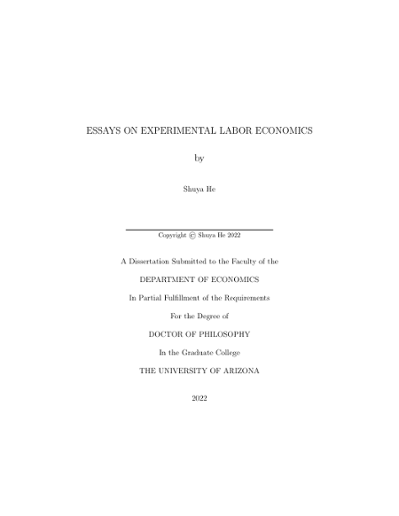 Over the last decade, the economics literature has seen an explosion of laboratory experiments focused on topics important to the discipline of labor economics. Using laboratory experiments to research labor economics subjects provides advantages over naturally occurring data. Individual decisions and human interactions are complicated. However, we can untangle underpinning mechanisms by either controlling or assessing other confounding factors with controlled laboratory trials, allowing us to explore a specific mechanism in a more direct manner. This dissertation is composed of three chapters. I incorporate behavioral and psychological insights into understanding labor economics issues such as gender inequality, couples divisions of labor and the worker-employer relationship. In the first chapter of my dissertation, “Don’t tell anyone I lost to a girl! Gender stereotypes and hiding low performance”, I seek to gain insights into why men seem to resent being outperformed or subordinate to a female. In an experiment I measure an individual’s willingness to pay to avoid having others know about their poor performance at arithmetic vis-à-vis a competitor. To develop hypotheses, I propose a statistical discrimination model in which individuals are averse to revealing lower performance against a stereotypically worse performer. The experiment tests (a) whether males are willing to pay more to hide poor performance relative to a female; and (b) whether both females and males are willing to pay more to hide the fact that they have been outperformed by a female than by a male. The experiment is conducted in both the US and China. These countries have different cultural norms and beliefs, in particular regarding the degree of gender stereotyping. An incentivized survey of subjects’ beliefs in China reveals a stereotype that males would be better performers than females at arithmetic tasks. In contrast, the survey reveals no stereotype in the US as to who is the better performer. The experimental results show that males in China and the U.S. are averse to being outed as a worse performer when competing against both males and females. Chinese males are more averse to exposure than Chinese females. In contrast to males, females in China are more averse to losing to other females. However, US females are more averse to losing to males. The findings suggest a more complex picture of gender differences than the common view that men hate to lose to women and have the loss revealed. In my second chapter, “Social norms and couples' labor division decisions”, I investigate how social norms predict couples’ decisions to exit the labor force. When there is an exogenous shock, such as an economic crisis, who will be the main breadwinner and who will stay at home? This question is extremely important for gender equity under the current global Covid-19 pandemic. Many schools have moved to online instruction and couples must decide who to stay at home to take care of their children. If more females quit the labor force, we can anticipate an increased gender disparity after the crisis. In this paper, I investigate the relationship between social norms regarding gender roles and couples’ behaviors in deciding who stays in the labor force and who quits. I also study whether peer pressure intensifies the effect. We conduct two separate experiments. One experiment is used to elicit the social norm about gender roles using a Krupka and Weber (2013) procedure. In another experiment, I recruit real-life college couples as subjects to perform a stylized task based on the labor force quitting decision. The task involves both parties initially performing a real effort task for payment. At a point in the session, one member of the couple is required to quit the task. Data gathered in China reveal that college couples are more likely to choose the boyfriend to continue the real-effort task for money and the girlfriend to quit the task, a result that is similar to gender norms in China. Whether their choices are revealed to their peers or not does not play a role in couples’ decisions. This finding implies that peer pressure does not intensify the effect of the social norm. The last chapter of my dissertation examines the effect of unrealized wages in a gift-exchange game. In an experiment, I consider whether employees work harder in response to compensation which might have been but is not actually realized. For example, do workers work harder, even in bad times, to repay a firm that pays generous bonuses in good times? To study this question, I extend the classical experimental gift-exchange game framework to study the effect of unrealized but intended kindness on employees’ effort. The question of interest is whether the workers' performance and the employers' profits are affected if workers are aware of wages they would have received under unrealized business conditions. I investigate a gift-exchange game where employers make wage offers contingent on two randomly realized states, good or bad, and workers choose an effort level after knowing which state is realized. I manipulate the visibility of wages under the unrealized state. By applying the model in Sebald (2010), unrealized wages are predicted to make a difference because they affect the worker's perception of the employer's kindness, and thus workers have a tendency to respond to the promise of high unrealized wages in addition to high realized wages. My main finding is that the awareness of the unrealized wage affects workers' effort choice and employers' profits if current states are good. The positive marginal effect of current wages is greater if wages in the unrealized bad state are higher. However, unrealized wages do not have an effect if current states are bad. These findings suggest that workers tend to reciprocate the unrealized kindness only if their realized payoff is sufficiently high and satisfactory. When firms hire employees in good years, it is profitable to include the information that they will treat the employees well even if the business conditions might be bad some day. However, in bad years, it’s unnecessary to inform the employees about their wage offers in good years.