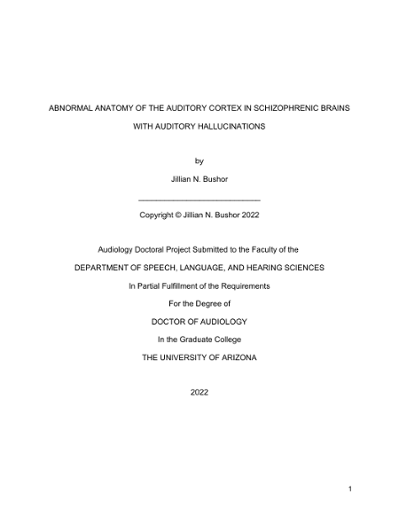 Background: Evolving research in the psychiatric literature has suggested that the auditory cortex region is smaller in people with schizophrenia who experience auditory hallucinations than in normal control individuals. These findings are not without controversy. While there has been significant research considering volumetric variance in pathologic brains with AH, there is a paucity of data considering the influence of morphology and surface area of primary auditory structures. Purpose: The purpose of this set of studies was to evaluate and compare the following variables in schizophrenic and control brains, both between groups and between hemispheres within groups: surface area of Heschl’s gyrus (HG) and planum temporale (PT), length of the Sylvian fissure (SF), length of the posterior extending ramus of the SF, and the morphological variants of HG, PT, and the posterior ramus. Evidence of morphologic variance or surface area differences in populations that are prone to experiencing auditory hallucinations may provide new or additional insight into the role of these neuroanatomical structures in central auditory processing during auditory hallucinations. Hypothesis: Based on the previous literature we had several hypotheses: (1) in separate structure analyses with regards to surface area, there will be reduced asymmetry for primary auditory structures (HG & PT) in schizophrenic brains with hallucinations compared to controls; (2) there will be reduced typical asymmetry in Sylvian fissure (SF) length for schizophrenic brains with hallucinations compared to controls; and (3) there will be consistent patterns of morphologic differences in at least one category of Heschl’s gyrus, planum temporale, or posterior ramus variants between schizophrenic brains with hallucinations and control brains. Methods: Imaging analysis was conducted using BrainVISA Anatomist software and MRIcron software to assess 51 control brains (102 hemispheres) from the Open Access Series of Imaging Studies (OASIS) repository and 51 schizophrenic brains (102 hemispheres) obtained from the NUSDAST (Northwestern University Schizophrenia Data and Software Tools) database. These neuroimaging softwares were used to quantify surface area of HG and PT, morphology of HG and PT, length of SF, and angle of the posterior extending ramus of SF. Results: This study found a lack of typical asymmetry between right and left HG in schizophrenic brains, and a significantly larger HG in the right hemisphere of controls compared to schizophrenics. There was also reduced asymmetry of the SF length in schizophrenics compared to controls. No significant findings were established for either PT surface area or morphological classifications of HG, PT, or posterior ramus. Key Words: Auditory Hallucinations, auditory cortex, anatomy, Heschl’s gyrus, planum temporale, superior temporal gyrus, Sylvian fissure, posterior ramus, ascending ramus, schizophrenia Abbreviations: Auditory Hallucinations (AH), central auditory nervous system (CANS), Heschl’s gyrus (HG), planum temporale (PT), planum polare (PP), primary auditory cortex (A1), Sylvian fissure (SF), schizophrenia (SZ), superior temporal plane (STP), supramarginal gyrus (SMG), region of interest (ROI)