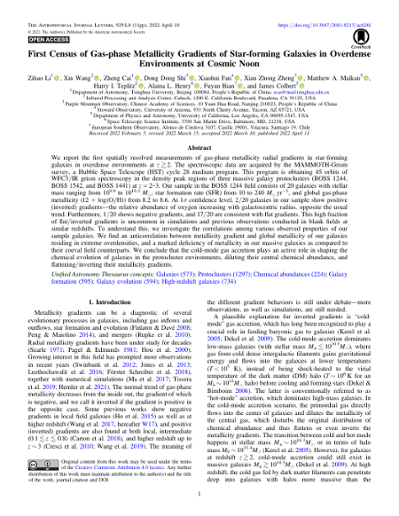 © 2022. The Author(s). Published by the American Astronomical Society. Original content from this work may be used under the terms of the Creative Commons Attribution 4.0 licence.

We report the first spatially resolved measurements of gas-phase metallicity radial gradients in star-forming galaxies in overdense environments at z ≳ 2. The spectroscopic data are acquired by the MAMMOTH-Grism survey, a Hubble Space Telescope (HST) cycle 28 medium program. This program is obtaining 45 orbits of WFC3/IR grism spectroscopy in the density peak regions of three massive galaxy protoclusters (BOSS 1244, BOSS 1542, and BOSS 1441) at z = 2-3. Our sample in the BOSS 1244 field consists of 20 galaxies with stellar mass ranging from 109.0 to 1010.3 M ⊙, star formation rate (SFR) from 10 to 240 M ⊙ yr-1, and global gas-phase metallicity ( 12+log(O/H) ) from 8.2 to 8.6. At 1σ confidence level, 2/20 galaxies in our sample show positive (inverted) gradients - the relative abundance of oxygen increasing with galactocentric radius, opposite the usual trend. Furthermore, 1/20 shows negative gradients, and 17/20 are consistent with flat gradients. This high fraction of flat/inverted gradients is uncommon in simulations and previous observations conducted in blank fields at similar redshifts. To understand this, we investigate the correlations among various observed properties of our sample galaxies. We find an anticorrelation between metallicity gradient and global metallicity of our galaxies residing in extreme overdensities, and a marked deficiency of metallicity in our massive galaxies as compared to their coeval field counterparts. We conclude that the cold-mode gas accretion plays an active role in shaping the chemical evolution of galaxies in the protocluster environments, diluting their central chemical abundance, and flattening/inverting their metallicity gradients. © 2022. The Author(s). Published by the American Astronomical Society.

Except where otherwise noted, this item's license is described as © 2022. The Author(s). Published by the American Astronomical Society. Original content from this work may be used under the terms of the Creative Commons Attribution 4.0 licence.